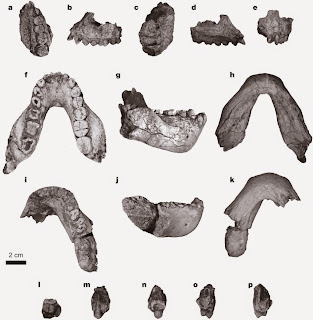 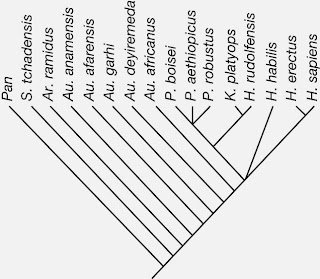 Middle Pliocene hominin species diversity has been a subject of debate over the past two decades, particularly after the naming of Australopithecus bahrelghazali and Kenyanthropus platyops in addition to the well-known species Australopithecus afarensis. Further analyses continue to support the proposal that several hominin species co-existed during this time period. Here we recognize a new hominin species (Australopithecus deyiremeda sp. nov.) from 3.3–3.5-million-year-old deposits in the Woranso–Mille study area, central Afar, Ethiopia. The new species from Woranso–Mille shows that there were at least two contemporaneous hominin species living in the Afar region of Ethiopia between 3.3 and 3.5 million years ago, and further confirms early hominin taxonomic diversity in eastern Africa during the Middle Pliocene epoch. The morphology of Au. deyiremeda also reinforces concerns related to dentognathic (that is, jaws and teeth) homoplasy in Plio–Pleistocene hominins, and shows that some dentognathic features traditionally associated with Paranthropus and Homo appeared in the fossil record earlier than previously thought.


Something is wrong in the world: a paleoanthropologist is using cladistics... also comes with an odd tree!  At least compared to the traditional ones.  Interesting that A sediba is not included.
Posted by Will Baird at Wednesday, May 27, 2015