Are the Japanese Starting to Work on a Boost Glide Weapon? 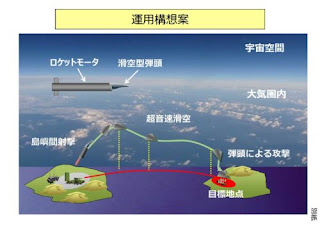 A glide bomb, separated from a missile at a very high altitude, falls at supersonic speed toward the target on ground. It is part of the Ground Self-Defense Force's capability of recapturing invaded or occupied remote islands.

The ministry aims to put glide bombs into practical use in fiscal 2026 by moving up its initial development schedule by about seven years, officials said.

Glide bombs are believed to use mobile launchers. Due to its long range, glide bombs, along with the Air SDF's planned antisurface long-range cruise missiles, may be considered to have an ability to strike enemy bases and raise alarm in neighboring countries.

Jane's is reporting the weapon is hypersonic rather than supersonic.
Posted by Will Baird at Sunday, September 30, 2018