China Leaked the Video of an Unknown Ground Launched Missile 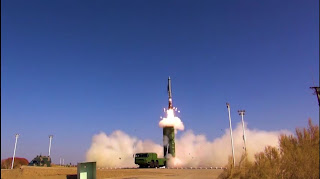 China appears to have accidentally revealed the existence of a new high-speed ground-launched missile. A brief glimpse of what looks to be a test launch of this previously unseen weapon emerged earlier this week in an official video released in the run-up to the 70th anniversary of the founding of the Communist State on Oct. 1. There have already been indications that a number of new or otherwise previously unseen aircraft, missiles, and other systems will be present at a major parade in Beijing to mark the occasion next week.

The People's Liberation Army Rocket Force, or PLARF, posted the full video on social media on Sept. 25, 2019. Sometime afterward, the original one-minute long montage was replaced with one that omitted the launch of the unknown weapon and replaced it with unrelated footage of known missiles, according to the South China Morning Post.