Different Disturbing News: IQs of the US States 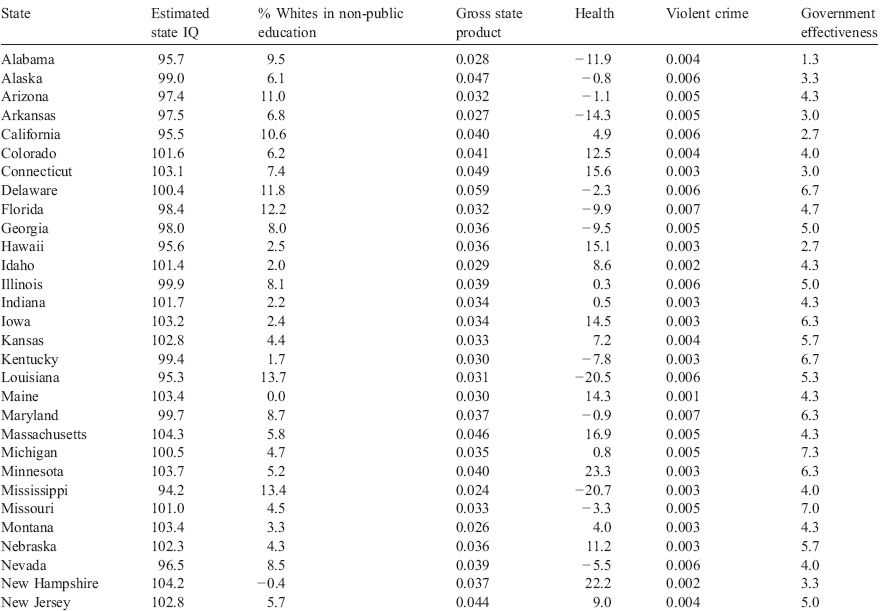 I got this from Dienekes' Anthropology Blog. I haven't read the paper (and don't have time right now), but it's fracking depressing that Massachuesetts has the highest IQ of the nation and the states that I love dearly and call home are so low: New Mexico and California. While I don't know how they derived their IQ stats for each state, the NM numbers REALLY depress me because you see, NM has LANL, SNL, and numerous other government labs. These are often filled with people with PhDs...which would suggest that they have higher than average IQs. With the small numbers of people in NM that should skew things the other way! Unless, of course, the rest of the state is all the worse.

What's really fracking depressing is that Texas, for love of all and good, has a higher IQ than NM or California. I weep for the nation.
Posted by Will Baird at Tuesday, October 17, 2006

more depressing for some than others I guess..... seeing as how I was born and raised in New Mexico but have now spent the majority of the past 14 years as a Texan :P

Ah, but your glorious state gave us the Shrub.

I was born in California and raised there for the first 10 years. Then we moved to NM and you and Tim made me spew juice to make a great begining impression. Thanx Alien Marshmellow. :P After 8 yars of LA, I moved to LC for 9 years. I have been back in California for 5 now.

Lyuda and I have been discussing where to move to next. I suspect we'll be here for another two to five years. I would love to move back to NM, but Lyuda's allergies kill her every time we visit. We've been oggling Colorado and Washington. Colorado lacks an ocean and Washington has climate issues...for now. ;)