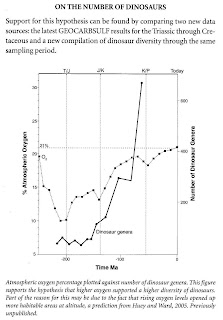 It's often said that the dinsosaurs were in decline during that last part of the Cretaceous. Yet, a nifty little grap from Ward's book (pg 193) seems to be very contrary to what I've been hearing previous. The dinosaurs were actually diversifying at the end of the Cretaceous instead of declining. IIRC, the statements that the dinosaurs were declining were based on the Hell's Creek formation. Might it not be possible that people were extrapolating from a single place for the whole of the world and it wasn't true? It would be interesting if we could get Darren Naish's or ole Dr Vector's attention turned to that quandry.
Posted by Will Baird at Friday, February 16, 2007