Multiple Extinctions in the Early Triassic? 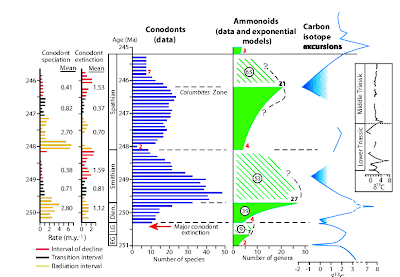 Department of Geology and Geophysics, University of Hawaii, Honolulu, HI 96822

Ammonoids and conodonts, being characterized by exceptionally high background rates of origination and extinction, were vulnerable to global environmental crises, which characteristically intensified background rates of extinction. Thus, it is not surprising that these taxa suffered conspicuous mass extinctions at the times of three negative Early Triassic global carbon isotopic excursions that resembled those associated with the two preceding Permian mass extinctions. In keeping with their high rates of origination, both the ammonoids and conodonts rediversified dramatically between the Early Triassic crises. Other marine taxa, characterized by much lower intrinsic rates of origination, were held at low levels of diversity by the Early Triassic crises; because global mass extinctions affect all marine life, these taxa must have experienced relatively modest expansions and contractions that have yet to be discovered, because they do not stand out in the fossil record and because the stratigraphic ranges of these taxa, being of little value for temporal correlation, have not been thoroughly studied.

REading the paper now...more comments another time. Today is going to be a mess. The whole next two months are going to be, truthfully.