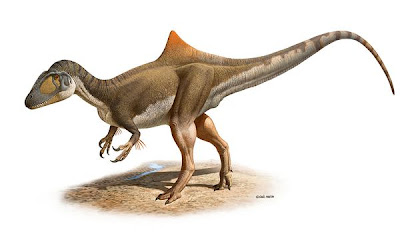 The Cretaceous period's carnivorous answer to a camel has been unearthed in Europe after 130 million years, a new study say.

C. corcovatus's hump possibly supported a mound of fleshy tissue storing fat, as on a camel, according to the study team, led by paleontologist Francisco Ortega of the Universidad Nacional de Educacíon a Distancia in Madrid.

Alternatively, the hump might have had a display role—for example, attracting a mate or intimidating rivals—or may have helped diffuse heat and regulate body temperature, Ortega said.

I refuse to call it a camelsaur.

So, being a carcharodontosaurid spread to likely point that quills if not feathers evolved, right?
Posted by Will Baird at Thursday, September 09, 2010

Well, at least some kind of integumentary structure. Darren has suggested that irregular bumps are not unknown on a variety of animal bones and do not always correspond to integument. They could be ossified points of contact for muscular or ligamenal sheets, for example.

It's also notable that these "quill knobs" are up on the side of the ulna instead of on the posterior edge.

As I believe Professor Benton of Bristol University has commented Concavenator corcovatus is certainly one "weird" dinosaur, but has there been some recent work on quill knobs on the ulna of Velociraptor mongoliensis? I am sure a paper was presented about this.