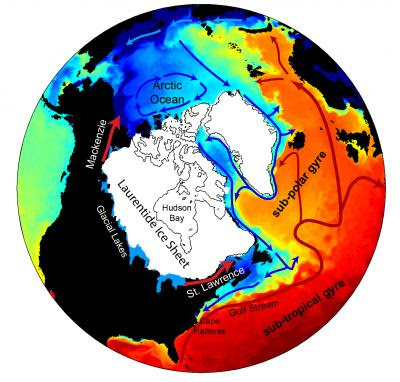 
For more than 30 years, climate scientists have debated whether flood waters from melting of the enormous Laurentide Ice Sheet, which ushered in the last major cold episode on Earth about 12,900 years ago, flowed northwest into the Arctic first, or east via the Gulf of St. Lawrence, to weaken ocean thermohaline circulation and have a frigid effect on global climate.

Now University of Massachusetts Amherst geoscientist Alan Condron, with Peter Winsor at the University of Alaska, using new, high-resolution global ocean circulation models, report the first conclusive evidence that this flood must have flowed north into the Arctic first down the Mackenzie River valley. They also show that if it had flowed east into the St. Lawrence River valley, Earth's climate would have remained relatively unchanged.

"This episode was the last time the Earth underwent a major cooling, so understanding exactly what caused it is very important for understanding how our modern-day climate might change in the future," says Condron of UMass Amherst's Climate System Research Center. Findings appear in the current issue of Proceedings of the National Academy of Sciences.

Events leading up to the sharp climate-cooling period known as the Younger Dryas, or more familiarly as the "Big Freeze," unfolded after glacial Lake Agassiz, at the southern edge of the Laurentide ice sheet covering Hudson Bay and much of the Canadian Arctic, catastrophically broke through an ice dam and rapidly dumped thousands of cubic kilometers of fresh water into the ocean.

This massive influx of frigid fresh water injected over the surface of the ocean is assumed to have halted the sinking of very dense, saltier, colder water in the North Atlantic that drives the large-scale ocean circulation, the thermohaline circulation, that transports heat to Europe and North America. The weakening of this circulation caused by the flood resulted in the dramatic cooling of North America and Europe.

Using their high resolution, global, ocean-ice circulation model that is 10 to 20 times more powerful than previously attainable, Condron and Winsor compared how meltwater from the two different drainage outlets was delivered to the sinking regions in the North Atlantic. They found the original hypothesis proposed in 1989 by Wally Broecker of Columbia University suggesting that Lake Aggasiz drained into the North Atlantic down the St. Lawrence River would have weakened the thermohaline circulation by less than 15 percent.

Condron and Winsor say this level of weakening is unlikely to have accounted for the 1,000-year cold climate event that followed the meltwater flood. Meltwater from the St. Lawrence River actually ends up almost 1,900 miles (3,000 km) south of the deep water formation regions, too far south to have any significant impact on the sinking of surface waters, which explains why the impact on the thermohaline circulation is so minor.

By contrast, Condron and Winsor's model shows that when the meltwater first drains into the Arctic Ocean, narrow coastal boundary currents can efficiently deliver it to the deep water formation regions of the sub-polar north Atlantic, weakening the thermohaline circulation by more than 30 percent. They conclude that this scenario, showing meltwater discharged first into the Arctic rather than down the St. Lawrence valley, is "more likely to have triggered the Younger Dryas cooling."

Condron and Windor's model runs on one of the world's top supercomputers at the National Energy Research Science Computing Center in Berkeley, Calif. The authors say, "With this higher resolution modeling, our ability to capture narrow ocean currents dramatically improves our understanding of where the fresh water may be going."

People ask me what we run on our dayjob supercomputers. Well. There ya go.
Posted by Will Baird at Monday, November 05, 2012