Central America Predicted to be Hit Hard by Climate Change 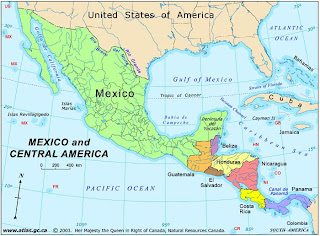 A growing body of scientific evidence ranks Mexico and its southern neighbors near the top of the list of countries most vulnerable to global warming, and advances in micro-forecasting foresee a grim future in alarming detail.

According to two new studies, a deadly combination of warmer weather and less rainfall in the years ahead will devastate yields of traditional crops like corn and beans, as well as the region's market-critical coffee harvest.

The ultra-local projections with shorter time horizons - as soon as the 2020s - include color-coded maps that for the first time provide virtually farm-specific climate change predictions, an innovation scientists hope will convince local stakeholders to plan accordingly.

That could mean switching to new seeds, shifting to hardier crops, or even abandoning long-established family farms.

The new research dissects the region that gave birth to modern corn and today produces a fifth of the world's high-end Arabica coffee beans, offering predictions at a level of detail of just one square kilometer, a leap in precision.

"There's a lot of potential here," said Jerry Meehl, a climate change scientist who shared in the 2007 Nobel Peace Prize won by the Intergovernmental Panel on Climate Change and former U.S. Vice President Al Gore. "What you want at the end of the day is information people can use."

According to Meehl, head of climate and global dynamics at the National Center for Atmospheric Research in Boulder, Colorado, the latest downscaled studies for agriculture in Mexico and Central America are among the highest-resolution climate change projections anywhere in the world.

The same countries are among the most threatened by climate change.

Mexico stands to lose between a quarter and a third of its agricultural production by 2080, according to a study by William Cline of the Washington, D.C.-based Center for Global Development. That is more than any country besides India.

"Now we have to focus on mitigation strategies that can make the impact we feel less painful," said Francisco Mayorga just before he left office as Mexico's agriculture minister on December 1.

"The fundamental problem is that water needs will go up as the heat rises, but unfortunately these countries will be getting less water," said Cline.


I know of several climate scientists that are not that impressed with the regional simulations.  They have repeated stated that the edges of the simulation where it couples with the larger world climate sim give less than desirable results.  They have stated they really want a 500 petaflop sustained machine to get these simulations on a global scale done right.  We're still at 1/30th the processing power to do that looking at the latest Top 500.
Posted by Will Baird at Thursday, December 20, 2012