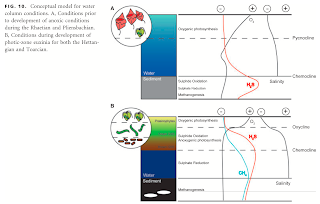 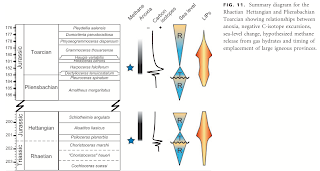 The end-Triassic mass extinction (c. 201.6 Ma) was one of the five largest mass-extinction events in the history of animal life. It was also associated with a dramatic, long-lasting change in sedimentation style along the margins of the Tethys Ocean, from generally organic-matter-poor sediments during the Triassic to generally organic-matter-rich black shales during the Jurassic. New core material from Germany provides biomarker evidence of persistent photic-zone euxinia during the Hettangian, the onset of which is associated with a series of both negative and positive carbon isotope excursions. Combined inorganic and organic geochemical and micropalaeontological analyses reveal strong similarities between the Hettangian and the better-known Toarcian anoxic event. These events appear to be the most clearly expressed events within a series of anoxic episodes that also include poorly studied black shale intervals during the Sinemurian and Pliensbachian. Both the Hettangian and Toarcian events are marked by important changes in phytoplankton assemblages from chromophyte- to chlorophyte-dominated assemblages within the European Epicontinental Seaway. Phytoplankton changes occurred in association with the establishment of photic-zone euxinia, driven by a general increase in salinity stratification and warming of surface waters. For both events, the causes of large negative carbon isotope excursions remain incompletely understood; evidence exists for both variation in the δ13C of atmospheric CO2 and variation in the sources of organic carbon. Regardless of the causes of δ13C variability, long-term ocean anoxia during the Early Jurassic can be attributed to greenhouse warming and increased nutrient delivery to the oceans triggered by flood basalt volcanism.

1.  When did the TJ Boundary move down?  That's a shift of over 1 million years.

2.  These models are relevant for the PT Extinction too.  They are NOT the same, but ofsimilar kind.  Likely the Toarcian event was of a similar kind as well.