A New Supercomputer Record Set: More Than One Million Cores Used for a Simulation 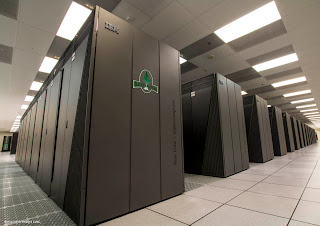 Researchers at Lawrence Livermore National Laboratory have performed record simulations using all 1,572,864 cores of Sequoia, the largest supercomputer in the world. Sequoia, based on IBM BlueGene/Q architecture, is the first machine to exceed one million computational cores. It also is No. 2 on the list of the world's fastest supercomputers, operating at 16.3 petaflops (16.3 quadrillion floating point operations per second).

The simulations are the largest particle-in-cell (PIC) code simulations by number of cores ever performed. PIC simulations are used extensively in plasma physics to model the motion of the charged particles, and the electromagnetic interactions between them, that make up ionized matter. High performance computers such as Sequoia enable these codes to follow the simultaneous evolution of tens of billions to trillions of individual particles in highly complex systems.

Frederico Fiuza, a physicist and Lawrence Fellow at LLNL, performed the simulations in order to study the interaction of ultra-powerful lasers with dense plasmas in a proposed method to produce fusion energy, the energy source that powers the sun, in a laboratory setting. The method, known as fast ignition, uses lasers capable of delivering more than a petawatt of power (a million billion watts) in a fraction of a billionth of a second to heat compressed deuterium and tritium (DT) fuel to temperatures exceeding the 50 million degrees Celsius needed to initiate fusion reactions and release net energy. The project is part of the U.S. Department of Energy's Office of Fusion Energy Science Program.

This method differs from the approach being taken by LLNL's National Ignition Facility to achieve thermonuclear ignition and burn. NIF's approach is called the "central hot spot" scenario, which relies on simultaneous compression and ignition of a spherical fuel capsule in an implosion, much like in a diesel engine. Fast ignition uses the same hardware as the hot spot approach but adds a high-intensity, ultrashort-pulse laser as the "spark" that achieves ignition.

The code used in these simulations was OSIRIS, a PIC code that has been developed over more than 10 years in collaboration between the University of California, Los Angeles and Portugal's Instituto Superior Técnico. Using this code, Fiuza demonstrated excellent scaling in parallel performance of OSIRIS to the full 1.6 million cores of Sequoia. By increasing the number of cores for a relatively small problem of fixed size, what computer scientists call "strong scaling," OSIRIS obtained 75 percent efficiency on the full machine. But when the total problem size was increased, what is called "weak scaling," a 97 percent efficiency was achieved.

"This means that a simulation that would take an entire year to perform on a medium-size cluster of 4,000 cores can be performed in a single day. Alternatively, problems 400 times greater in size can be simulated in the same amount of time," Fiuza said. "The combination of this unique supercomputer and this highly efficient and scalable code is allowing for transformative research."

OSIRIS is routinely used for fundamental science during the test phase of Sequoia in simulations with up to 256,000 cores. These simulations are allowing researchers, for the first time, to model the interaction of realistic fast-ignition-scale lasers with dense plasmas in three dimensions with sufficient speed to explore a large parameter space and optimize the design for ignition. Each simulation evolves the dynamics of more than 100 billion particles for more than 100,000 computational time steps. This is approximately an order of magnitude larger than the previous largest simulations of fast ignition.