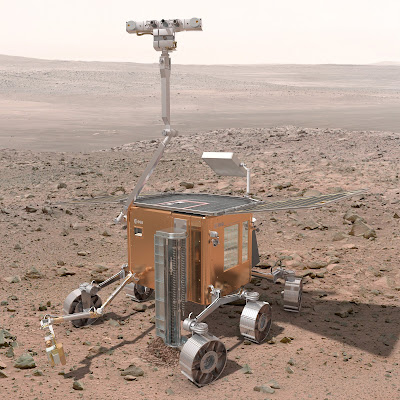 Dordain said, though, that the Martian rover ExoMars, which had previously been planned for launch in November 2013, would head to the Red Planet in early 2016.

Planning concerns made it preferable to aim for the next launch window for Mars, he said, insisting that there had not been budgetary problems.

The ExoMars mission entails sending a 200-kilogramme (440-pound) wheeled rover, which will carry a drill enabling it delve up to two metres (seven feet) below the surface to see if the Red Planet has microbial life, or the potential for it.

ExoMars was initially planned for launch in 2011, but this date had already slipped by two years to help resolve what its goals should be.

I hope this doesn't get delayed into oblivion.
Posted by Will Baird at Tuesday, November 11, 2008