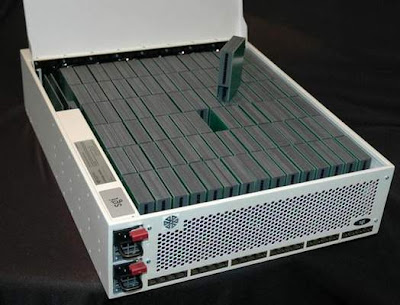 With 10,000 Processor Cores, Silicon Graphics Molecule 'Concept Computer' Uses Half the Power and Just 1.4 Percent of the Space of Comparable PC Cluster

Like a futuristic concept car points to potential innovations in transportation, Silicon Graphics Molecule is a concept computer that illustrates how the latest low-watt, multi-core consumer electronics technology, such as the Intel® Atom™ processor, can be combined with breakthrough Silicon Graphics® Kelvin™ cooling technology to pack more than 10,000 cores into a single rack.

Engineers at Silicon Graphics research labs developed the system to show how consumer electronics technologies and emerging marketplace trends might someday be applied to overcome the limits of today's high-throughput clusters. The Silicon Graphics Molecule concept computer balances processor speed, sustained memory bandwidth, and power consumption. The system has been shown to deliver sustained results on scientific and business problems from seismic processing to rendering and distributed searching.

Features of the Silicon Graphics Molecule concept computer include:

If someday brought to market, a single-rack system based on the Silicon Graphics Molecule concept computer would offer the computing power and memory bandwidth of more than 750 high-end PCs, yet it would consume less than half the power and less than 1.4 percent of the physical space.

Now that's closer to a HPC desktop. It would have to have a benchmark of 1.2 GFlops/core to make it onto the list. However, first off, it's only a concept computer. Secondly, this will make John at work very happy. Third: reliability. How often do I replace a CPU? Is it a 1% failure rate? What's the MBTF? Better be more than a billion hours: one million hours means there's a CPU failing every 4 days per node. I'd rather not be on the other side of the phone when a researcher calls irate that his 10 million core job had to get restarted again. Fourth, this still eats 40 kilowatts per node...minimum. hmmm. Big power plug. Better consumption per flop, but...

Okay. Mental exercise. I want 1024 nodes here (sorta a magic HPC number). I am going to assume a usefulflop rate of 500 Mflops/core and a gigabyte of memory per core (we really like 2, but...) That means this system would have 10,240,000 cores and more than 10 Petabytes of memory. (o.O) The useful sustained computational rate of 5 petaflops. However, we have a power requirement in excess of 41 megawatts just for the CPUs[1]. Not counting memory, chipset, spinning disk or interconnect. Ouch. MBTF of 1 billion hours? Means I am yanking a failed CPU every 4 days. Wait is the MBTF even close to that?

Though it does have the old logo on there. How cool is that?

(Answer: really cool. That alone takes care of 90% of any cooling issues.)

At 40 KW I am sure that you will not need to worry about heating bills either...Your electrical bill OTOH...

Heh. Depends on where one lives.

Though I'm fairly certain they'd notice if I started running something even as comparatively moderate as a deskside onyx.