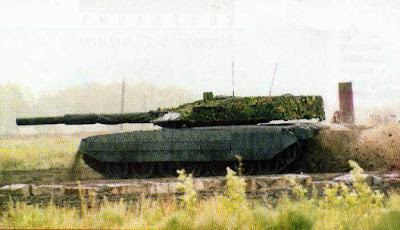 There has been a long and, frankly, ridiculous speculation on the next Russian tank. There were wild rumors of a monstrosity that was armed with either a 135mm or 152mm direct fire, high velocity cannon meant to kill M-1s from the frontal aspect. This sounded like a truly nasty critter that was under forever development at the tank factories of the xUSSR. Well, Medvedev almost assuredly just put that nightmare where it belongs: strictly in the imagination. In fact, back in the wank fantasy dreams.

The Russians were never developing the monster T-95. To think otherwise, looking back, was absurd: I was hoping actually, cuz, well, it'd be so kewl. Even though tanks are far cheaper than aircraft, the Russians simply did not have enough money to produce something completely new. Since the Black Eagle is just a derivative of the T-80 tank - new turret - means that they are going with what they have...mildly upgraded. Again, Cold War tech with a few sprinkles on top. No monster gun. No unmanned turret. Nothing more than a mild evolution of what has come before. In fact, probably easily killable even by the FCS MCS, a light tank.

(if that ever comes to fruition).
Posted by Will Baird at Tuesday, November 04, 2008