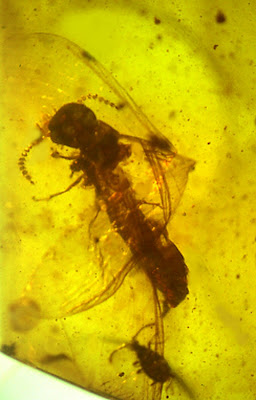 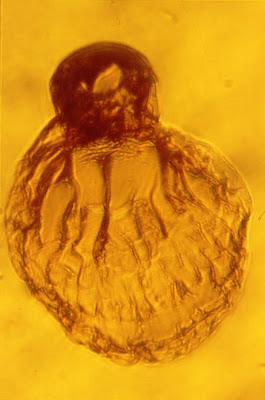 The analysis of a termite entombed for 100 million years in an ancient piece of amber has revealed the oldest example of "mutualism" ever discovered between an animal and microorganism, and also shows the unusual biology that helped make this one of the most successful, although frequently despised insect groups in the world.

The findings were made by George Poinar, an Oregon State University researcher and international expert on life forms found in amber. It was just published in Parasites and Vectors, a professional journal.

This particular termite was probably flying around while mating in a wet, humid tropical forest in what is now Myanmar during the Early Cretaceous period – the age of the dinosaurs. It may have been attacked by a bird or somehow torn open, and then it dropped into the sticky, oozing tree sap that would later become amber, providing an opportunity for the biology of this ancient insect to be revealed in a way that would otherwise have been impossible.

Out of its wounded abdomen spilled a range of protozoa, which even then were providing a key function for the termite – they helped it to digest wood. Between animals and microorganisms, this is the earliest example ever discovered of "mutualism," which is one type of symbiotic relationship in which two species help each other.

"Termites live on cellulose, mostly from the dead wood they chew, but they depend on protozoa in their gut to provide the enzymes that can digest the wood," Poinar said. "These protozoa would die outside of the termite, and the termite would starve if it didn't have the protozoa to aid in digestion. In this case they depend on each other for survival."

Even more primitive termites may have fed on a range of things they could digest themselves, Poinar said, but eventually they acquired protozoa that dramatically increased their ability to digest cellulose, and through evolutionary processes they came to depend on it.

Today, modern termites are one of the world's most pervasive and successful insect groups, with about 2,300 known species, mostly in tropical settings, busily at work chewing wood or other plant fiber that protozoa help to digest. They have important ecological roles, helping to create habitat, build soil fertility, recycle nutrients and serve as food for many predators. As a social species similar to ants, some colonies can have 20 million individual insects. And they also cause massive amounts of damage every year to wood structures in much of the world.

Their dependence on these protozoa is now well understood, and the process isn't always pretty.

Somewhere on the evolutionary scale the termites began producing a liquid that contained protozoa that they would excrete. The termite offspring in turn consume the feces and thereby gain the protozoa in their digestive systems.

It took time for all of this to get worked out, the study indicated. The successful establishment of protozoa in the termites required them to withstand the chemical and physical conditions inside the alimentary tract, use the gut contents as a food source, cause no damage to the host and be carried through successive stages and generations.

But by the different species each specializing at what they do best – the termite eats, the protozoa digests – the two groups have both had extraordinary evolutionary success.

"The relationship between termites and protozoa is very close and has been stabilized now for a very long time because of its obvious value," Poinar said. "It's exciting to understand that this classic example of mutualism has been going on now for at least 100 million years."

As well as outlining this age-old example of mutualism, the new study revealed 10 new fossil flagellate species of protozoa, a new species of termite, a new genus of fossil amoeba and 14 additional trophic and encysted protist stages.

The amber that contained the termite used in this study came from a mine first excavated in 2001 in the Hukawng Valley in Myanmar, in a formation that was between 97 and 110 million years old.

There seems to be another arthropod near the termite. Looks like a tick of some sort, but I don't know...

I'm not sure its a tick - antenna look wrong to me, but I am not a invertebrate type whatsoever.

I only see three pairs of legs. That plus what looks like segmented (bead-like) antennae suggests beetle to me. But the body shape...that looks more like a tick or even a collembola.