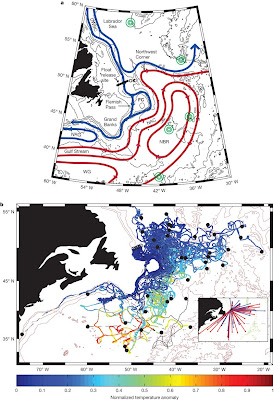 The familiar model of Atlantic ocean currents that shows a discrete "conveyor belt" of deep, cold water flowing southward from the Labrador Sea is probably all wet.

New research led by Duke University and the Woods Hole Oceanographic Institution relied on an armada of sophisticated floats to show that much of this water, originating in the sea between Newfoundland and Greenland, is diverted generally eastward by the time it flows as far south as Massachusetts. From there it disburses to the depths in complex ways that are difficult to follow.

A 50-year-old model of ocean currents had shown this southbound subsurface flow of cold water forming a continuous loop with the familiar northbound flow of warm water on the surface, called the Gulf Stream.

"Everybody always thought this deep flow operated like a conveyor belt, but what we are saying is that concept doesn't hold anymore," said Duke oceanographer Susan Lozier. "So it's going to be more difficult to measure these climate change signals in the deep ocean."

And since cold Labrador seawater is thought to influence and perhaps moderate human-caused climate change, this finding may affect the work of global warming forecasters.

"To learn more about how the cold deep waters spread, we will need to make more measurements in the deep ocean interior, not just close to the coast where we previously thought the cold water was confined," said Woods Hole's Amy Bower.

If this pans out, it's really big.

Correspondence to: Amy S. Bower1M. Susan Lozier2 Correspondence and requests for materials should be addressed to A.S.B. (Email: abower@whoi.edu) and M.S.L. (Email: mslozier@duke.edu).

To understand how our global climate will change in response to natural and anthropogenic forcing, it is essential to determine how quickly and by what pathways climate change signals are transported throughout the global ocean, a vast reservoir for heat and carbon dioxide. Labrador Sea Water (LSW), formed by open ocean convection in the subpolar North Atlantic, is a particularly sensitive indicator of climate change on interannual to decadal timescales1, 2, 3. Hydrographic observations made anywhere along the western boundary of the North Atlantic reveal a core of LSW at intermediate depths advected southward within the Deep Western Boundary Current (DWBC)4, 5, 6, 7, 8, 9. These observations have led to the widely held view that the DWBC is the dominant pathway for the export of LSW from its formation site in the northern North Atlantic towards the Equator10, 11. Here we show that most of the recently ventilated LSW entering the subtropics follows interior, not DWBC, pathways. The interior pathways are revealed by trajectories of subsurface RAFOS floats released during the period 2003–2005 that recorded once-daily temperature, pressure and acoustically determined position for two years, and by model-simulated 'e-floats' released in the subpolar DWBC. The evidence points to a few specific locations around the Grand Banks where LSW is most often injected into the interior. These results have implications for deep ocean ventilation and suggest that the interior subtropical gyre should not be ignored when considering the Atlantic meridional overturning circulation.