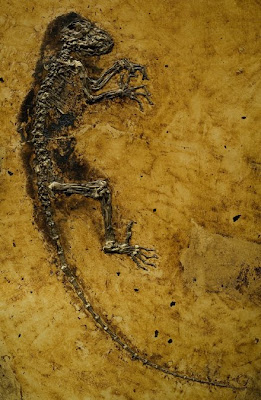 Complete Primate Skeleton from the Middle Eocene of Messel in Germany: Morphology and Paleobiology

The best European locality for complete Eocene mammal skeletons is Grube Messel, near Darmstadt, Germany. Although the site was surrounded by a para-tropical rain forest in the Eocene, primates are remarkably rare there, and only eight fragmentary specimens were known until now. Messel has now yielded a full primate skeleton. The specimen has an unusual history: it was privately collected and sold in two parts, with only the lesser part previously known. The second part, which has just come to light, shows the skeleton to be the most complete primate known in the fossil record.
Methodology/Principal Findings

We describe the morphology and investigate the paleobiology of the skeleton. The specimen is described as Darwinius masillae n.gen. n.sp. belonging to the Cercamoniinae. Because the skeleton is lightly crushed and bones cannot be handled individually, imaging studies are of particular importance. Skull radiography shows a host of teeth developing within the juvenile face. Investigation of growth and proportion suggest that the individual was a weaned and independent-feeding female that died in her first year of life, and might have attained a body weight of 650–900 g had she lived to adulthood. She was an agile, nail-bearing, generalized arboreal quadruped living above the floor of the Messel rain forest.
Conclusions/Significance

Darwinius masillae represents the most complete fossil primate ever found, including both skeleton, soft body outline and contents of the digestive tract. Study of all these features allows a fairly complete reconstruction of life history, locomotion, and diet. Any future study of Eocene-Oligocene primates should benefit from information preserved in the Darwinius holotype. Of particular importance to phylogenetic studies, the absence of a toilet claw and a toothcomb demonstrates that Darwinius masillae is not simply a fossil lemur, but part of a larger group of primates, Adapoidea, representative of the early haplorhine diversification.

Carl Zimmer of The Loom has more comments. Link to the paper at the top.
Posted by Will Baird at Tuesday, May 19, 2009