Horner Got to Him: Canuck to Make Chicken into Dinosaur 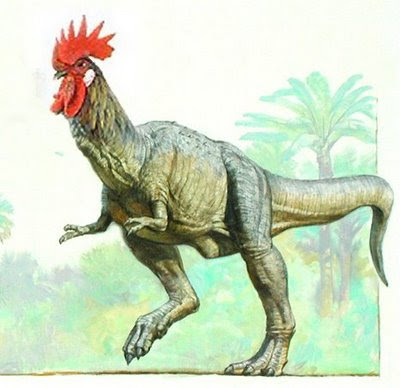 After years spent hunting for the buried remains of prehistoric animals, a Canadian paleontologist now plans to manipulate chicken embryos to show he can create a dinosaur.

Hans Larsson, the Canada Research Chair in Macro Evolution at Montreal's McGill University, said he aims to develop dinosaur traits that disappeared millions of years ago in birds.

Larsson believes by flipping certain genetic levers during a chicken embryo's development, he can reproduce the dinosaur anatomy, he told AFP in an interview.

Though still in its infancy, the research could eventually lead to hatching live prehistoric animals, but Larsson said there are no plans for that now, for ethical and practical reasons -- a dinosaur hatchery is "too large an enterprise."

"It's a demonstration of evolution," said Larsson, who has studied bird evolution for the last 10 years.

"If I can demonstrate clearly that the potential for dinosaur anatomical development exists in birds, then it again proves that birds are direct descendants of dinosaurs."

The research is funded by the Natural Sciences and Engineering Research Council of Canada, the Canada Research Chairs program and National Geographic.

Tempted to mark this as 'bad science,' but I could be wrong. Who knows how many pseudogenes are left in a chicken's genome. Just remember, you Canadians brought this on yourself!
Posted by Will Baird at Tuesday, August 25, 2009

i dont see the good in producing dinos, what for to look at, live stock, pets?