Does Titan Have an Europa-style Interior Ocean? 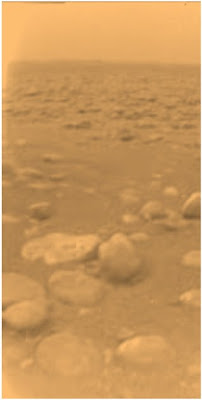 In the seven years Cassini has spent orbiting Saturn, the spacecraft has sent back mountains of data that has changed our view of the ringed planet and its moons. Saturn's largest moon, Titan, has been a particular focus of attention because of its dense, complex atmosphere, its weather and its lakes and oceans.
Now it looks as if Titan is even stranger still. The evidence comes from careful observations of Titan's orbit and rotation. This indicates that Titan has an orbit similar to our Moon's: it always presents the same face towards Saturn and its axis of rotation tilts by about 0.3 degrees.
Together, these data allow astronomers to work out Titan's moment of inertia and this throws up something interesting. The numbers indicate that Titan's moment of inertia can only be explained if it is a solid body that is denser near the surface than it is at its centre.
That's just plain weird--unthinkable really, given what we know about how planets and moons form.
But there is another explanation, however: that Titan isn't solid at all.
Today, Rose-Marie Baland and buddies at the Royal Observatory of Belgium in Brussels, crunch some numbers to see whether a liquid model is compatible with the measured moment of inertia. "We assume the presence of a liquid water ocean beneath an ice shell and consider the gravitational and pressure torques arising between the different layers of the satellite," they say.
Their conclusion is that Titan's moment of inertia could well be explained by the presence of liquid ocean beneath an icy shell.

no time, but intriguing. I think it'd need to work for methane rather than water though.
Paper here.
Posted by Will Baird at Monday, April 18, 2011