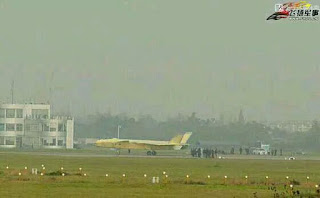 A new J-20 has emerged with the tail number '2101' and rumor has it this is the first production aircraft.  RUmors also claim the IOC for the J-20 will be 2018.  Let's express a few doubts about that.

The Japanese stealth fighter prototype will fly this February (news in Japanese).  The ATD-X will lead into the Japanese's F-3 5th Generation Fighter Program with a prototype of the F-3 flying in 2024 and production to begin in 2027.

DAPA will be signing the KF-X contract with KAI.

More information has come out, or at least the Russian version, of the cheaper offer to India for the PAK-FA.

With the cheaper off, it seems the negotiations between Russia and India have accelerated.