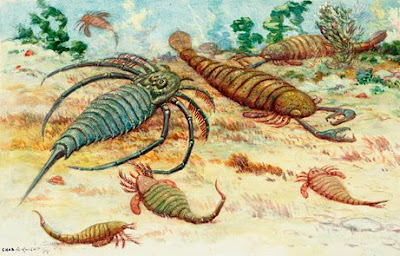 The first tool-users in the world may have been scorpion-like sea beasts. The extinct animals used other creatures' shells to help them breathe on land 500 million years ago, new research suggests.

The marks appear to have been made by multi-legged creatures that had all dragged some weight on their left sides.

The tracks look like those made by modern-day hermit crabs, but the marks date back to some 300 million years before those crustaceans existed. (See a prehistoric time line.)

Based on the footprint patterns, researchers suggest the tracks were made by sea scorpions, critters that resembled "a cross between a scorpion and a horseshoe crab," said lead study author James Whitey Hagadorn of Amherst College.

Sea scorpions—thought to be among the first marine animals to evolve for life on land—breathed underwater using gills on their tails.

The odd drag marks could have been from the coiled shells of snails or similar critters, which the ocean-dwelling scorpions stuffed their tails into so they could venture above water, the researchers suggest.

Humid air trapped inside the shells might have protected the sea scorpions' gills from drying out during brief forays into the open air—like reverse scuba gear.

"Instead of an aqualung, like you have with human divers, you have the reverse: an aerolung," Hagadorn said.

Ok. Not as profound as it sounded at first Curse those people wanting more traffic!!!

OTOH, this is kewl...if not much more profound than a hermit crab like behavior.
Posted by Will Baird at Monday, April 13, 2009