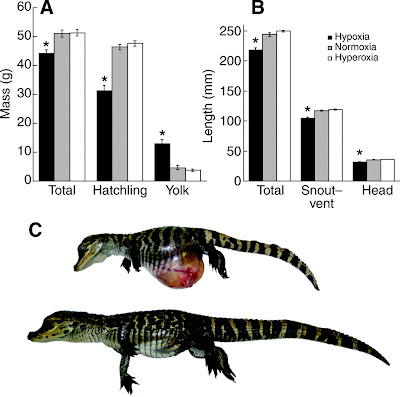 During the last 540 million years, the earth's oxygen levels have fluctuated wildly. Knowing that the dinosaurs appeared around the time when oxygen levels were at their lowest at 12%, Tomasz Owerkowicz, Ruth Elsey and James Hicks wondered how these monsters coped at such low oxygen levels. But without a ready supply of dinosaurs to test their ideas on, Owerkowicz and Hicks turned to a modern relative: the alligator. 'We knew testing the effects of different oxygen levels would work with alligators,' Owerkowicz explains, 'because crocodilians have survived in their basic shape and form for 220 million years. They must be doing something right to have survived the oxygen fluctuations.' Choosing to start at the beginning of alligator development, the trio decided to try incubating alligator eggs at different oxygen levels, to find out how the youngsters grew and developed and publish their results on April 17 2009 in The Journal of Experimental Biology at http://jeb.biologists.org.

Receiving newly laid alligator eggs from Elsey at the Rockefeller Wildlife Refuge, Owerkowicz divided the eggs into groups incubated at 12% (low) oxygen, 21% (normal) oxygen and 30% (high) oxygen, and waited to see what would happen. After almost 10 weeks of waiting, the eggs began hatching and Owerkowicz could see that there were no obvious differences between the alligators that developed in normal and high oxygen atmospheres.

Recent palaeoatmospheric models suggest large-scale fluctuations in ambient oxygen level over the past 550 million years. To better understand how global hypoxia and hyperoxia might have affected the growth and physiology of contemporary vertebrates, we incubated eggs and raised hatchlings of the American alligator. Crocodilians are one of few vertebrate taxa that survived these global changes with distinctly conservative morphology. We maintained animals at 30°C under chronic hypoxia (12% O2), normoxia (21% O2) or hyperoxia (30% O2). At hatching, hypoxic animals were significantly smaller than their normoxic and hyperoxic siblings. Over the course of 3 months, post-hatching growth was fastest under hyperoxia and slowest under hypoxia. Hypoxia, but not hyperoxia, caused distinct scaling of major visceral organs–reduction of liver mass, enlargement of the heart and accelerated growth of lungs. When absorptive and post-absorptive metabolic rates were measured in juvenile alligators, the increase in oxygen consumption rate due to digestion/absorption of food was greatest in hyperoxic alligators and smallest in hypoxic ones. Hyperoxic alligators exhibited the lowest breathing rate and highest oxygen consumption per breath. We suggest that, despite compensatory cardiopulmonary remodelling, growth of hypoxic alligators is constrained by low atmospheric oxygen supply, which may limit their food utilisation capacity. Conversely, the combination of elevated metabolism and low cost of breathing in hyperoxic alligators allows for a greater proportion of metabolised energy to be available for growth. This suggests that growth and metabolic patterns of extinct vertebrates would have been significantly affected by changes in the atmospheric oxygen level.

So. Does this support Ward's hypothesis about hypoxia strongly effecting vertebrate evolution or not? There are some hints, but I have to wonder about this...has anyone done anything like this for the monotremes?

My post "Gasping for Paleo Air" touches on some of this, btw, as there is evidence that the hypoxic levels may not have dropped as low as what has been hypothesized (17/18% instead of 11/12%) because vegetation won't burn under a certain oxygen level and there is ample evidence for forest fires at multiple geological time periods.
Posted by Will Baird at Friday, April 17, 2009