A species of ancient predator with saw-like teeth, sleek bodies and a voracious appetite for meat survived a major extinction at a time when the distant relatives of mammals ruled the earth.

A detailed description of a fossil that scientists identify as a varanopid "pelycosaur" is published in the December issue of Naturwissenschaften – The Science of Nature. Professors Sean Modesto from Cape Breton University, and Robert Reisz from University of Toronto Mississauga provide evidence that a group of ancient, agile predators called varanopids survived for more than 35 million years, and co-existed with more advanced animals.

Modesto and the team performed a detailed examination of the partial skull and jaw of the youngest known primitive mammal-like animal, which they believe lived over 260 million years ago in the Permian Period. The fossils are from rocks forming the Pristerognathus Assemblage Zone of the Beaufort Group in South Africa.

"These animals were the most agile predators of their time, sleek-looking when compared to their contemporaries," says Reisz. "They seem to have survived a major change in the terrestrial fauna that occurred during the Middle Permian, a poorly understood extinction event in the history of life on land."

According to Modesto, who was once a student at U of T Mississauga, "these ancient animals really looked like modern goannas or monitor lizards, but are actually more closely related to mammals."

The fossil revealed teeth that are strongly flattened, curved towards the throat and with finely serrated cutting edges typical of hypercarnivores--animals with a diet that consists of more than 70 per cent meat.

Modesto and his colleagues concluded that these varanopids had a longer co-existence with animals that eventually evolved into mammals than previously believed. They suggest that the dental and skeletal design of varanopids, reminiscent of the Komodo dragon of today, may have contributed to their long survival and their success.

no time. But VERY interesting.
Posted by Will Baird at Tuesday, December 06, 2011 2 comments: 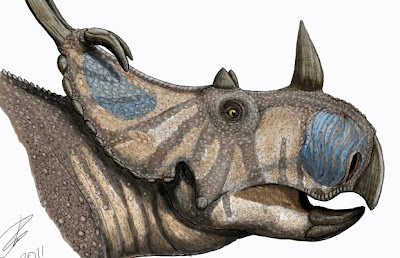 Sheesh. Ceratopsians were the freakin NorAm bunnies of the Late Cretaceous.

(very nice Andy)
Posted by Will Baird at Tuesday, December 06, 2011 No comments: 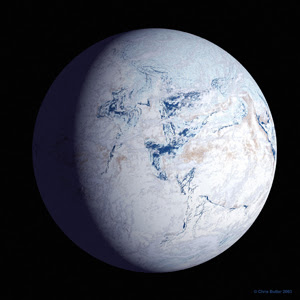 Two University of Colorado Boulder researchers who have adapted a three-dimensional, general circulation model of Earth's climate to a time some 2.8 billion years ago when the sun was significantly fainter than present think the planet may have been more prone to catastrophic glaciation than previously believed.

The new 3-D model of the Archean Eon on Earth that lasted from about 3.8 billion years to 2.5 billion years ago, incorporates interactions between the atmosphere, ocean, land, ice and hydrological cycles, said CU-Boulder doctoral student Eric Wolf of the atmospheric and oceanic sciences department. Wolf has been using the new climate model -- which is based on the Community Earth System Model maintained by the National Center for Atmospheric Research in Boulder -- in part to solve the "faint young sun paradox" that occurred several billion years ago when the sun's output was only 70 to 80 percent of that today but when geologic evidence shows the climate was as warm or warmer than now.

In the past, scientists have used several types of one-dimensional climate models -- none of which included clouds or dynamic sea ice -- in an attempt to understand the conditions on early Earth that kept it warm and hospitable for primitive life forms. But the 1-D model most commonly used by scientists fixes Earth's sea ice extent at one specific level through time despite periodic temperature fluctuations on the planet, said Wolf.

"The inclusion of dynamic sea ice makes it harder to keep the early Earth warm in our 3-D model," Wolf said. "Stable, global mean temperatures below 55 degrees Fahrenheit are not possible, as the system will slowly succumb to expanding sea ice and cooling temperatures. As sea ice expands, the planet surface becomes highly reflective and less solar energy is absorbed, temperatures cool, and sea ice continues to expand."

This is interesting since it seems to be rather contrary to the general consensus that the earth was actually a lot warmer based on isotopic geological data.

UNIVERSITY OF ILLINOIS AT URBANA CHAMPAIGN
Department of Atmospheric Sciences
School of Earth, Society, and Environment


The Department of Atmospheric Sciences within the School of Earth, Society, and Environment at the University of Illinois at Urbana-Champaign invites applications for a full-time, tenure-track/tenured faculty position at the rank of Assistant or Associate Professor in climate science. The position is a nine-month academic appointment with a target start date of August 16, 2012.

The area of research, within the context of climate science, is open. Possible areas of emphasis include, but are not limited to, causes of past and future climate change; studies of climate and climate change at regional to global scales using numerical modeling, data analysis, and/or remote sensing techniques; climate change impacts and the mitigation of, and adaptation to future impacts of a changing climate. Candidates with exceptional strengths in other related research areas are also welcome to apply.

The successful candidate must have a Ph.D. degree by the date of appointment. The candidate must show the potential to establish a quality research and teaching program and collaborate effectively with other faculty. For consideration at the Associate level, the candidate must also demonstrate a strong external funding and publication record. A tenured Associate Professor appointment is possible for a candidate with the appropriate research credentials who has demonstrated excellence in teaching at either or both the graduate and undergraduate levels, commensurate with tenure guidelines at the University of Illinois at Urbana-Champaign.

The Department currently comprises 10 faculty, 5 emeritus faculty, 8 affiliated and adjunct faculty, 1 lecturer, 1 instructor, 9 research scientists, 51 graduate students, and 80 undergraduates. The members of the Department work in a broad range of research areas. Opportunities are available for collaborations with departments across the university, with linkages already existing with the Departments of Geography and Geology within the School of Earth, Society, and Environment, the Illinois State Water Survey, the National Center for Supercomputing Applications (NCSA), the Electrical and Civil Engineering Departments and many others. More information about the department can be found at www.atmos.illinois.edu, and about the School of Earth, Society and Environment at www.earth.illinois.edu.

A competitive salary, commensurate with qualifications and experience, and benefits package will be offered. To ensure full consideration applications must be submitted online by December 15, 2011. Create your U of I application through http://jobs.illinois.edu and upload your application materials: cover letter, vita, list of publications, record of research funding, teaching record, description of research and teaching interests, and names and email addresses of at least 3 references. Applicants may be interviewed before the closing date; however, no hiring decision will be made until after that date.

Questions can be addressed to Prof. Atul Jain, Chair of the Search Committee, at Email: jain1@illinois.edu or Phone: 217-333-2128.

The University of Illinois is an Affirmative Action /Equal Opportunity Employer and welcomes individuals with diverse backgrounds, experiences, and ideas who embrace and value diversity and inclusivity. (www.inclusiveillinois.illinois.edu)

Kepler 22B: A Potentially Habitable Planet 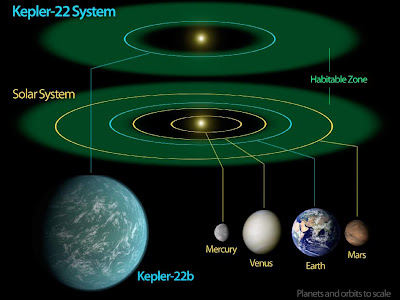 Also check out the Habitable Exoplanet Catalog. Nifty press release about the latter here.
Posted by Will Baird at Tuesday, December 06, 2011 No comments: