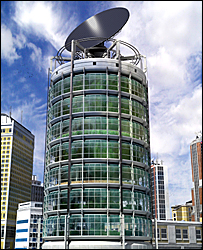 Downtown Manhattan is hardly a place you would associate with agriculture. Rather, with its countless restaurants, cafes, shops and supermarkets this is a place of consumption.

And so every morsel, every bite of food New Yorkers munch through every day must be trucked, shipped or flown in, from across the country, and across the world.

Now though, scientists at Columbia University are proposing an alternative. Their vision of the future is one in which the skyline of New York and other cities include a new kind of skyscaper: the "vertical farm".

The idea is simple enough. Imagine a 30-storey building with glass walls, topped off with a huge solar panel.

On each floor there would be giant planting beds, indoor fields in effect.

There would be a sophisticated irrigation system.

And so crops of all kinds and small livestock could all be grown in a controlled environment in the most urban of settings.

That means there would be no shipping costs, and no pollution caused by moving produce around the country.

It's all the brainchild of Columbia University Professor Dickson Despommier.

I have a hard time believing that this was fly at all. The economics of it would be loss generating I would think wrt to the value generated via using it as a high rise for homes or offices. Strange. Carlos? Doug? Thoughts?
Posted by Will Baird at Wednesday, June 20, 2007

In principle, it's not too different from truck farming in north Jersey (some fine tomatoes there). But the cost of land in Manhattan is rather high. In Brooklyn or Queens, not so bad.

There'd be a certain cachet. It'd work best with an associated boutique restaurant. Or maybe with a Whole Foods-like operation.

I followed through a passing reference on Crooked Timber a while back about Dutch greenhouse farming. They're small operations on the edges of urban areas, low-capital enterprises which have built up a lot of shared working knowledge through the years. Cucumbers, sweet peppers, tomatoes (though their tomatoes are still sometimes called "water bombs").

But the amount of fresh air freight which comes to New York is ridiculous. You can walk the twenties of Sixth Avenue in the morning, in the Flower District, and smell a hundred different species, easy, fresh from South America. Specialty fish for the sushi restaurants. A lot of produce. The inefficiencies are being squeezed out of the distribution system.

Ah. Ok. That's one of the nioe things about living in California. Damned all the fruit and such is local and fresh. And if you really want to, go pick it yourself.

We did for cherries, apricots, peaches, and strawberries a couple weeks ago. It was rather nice. I'm a little sick of cherries right now: we got them for $.50/lb. Whites and bing. About 30 lbs.

I was on rotation or we would have done that for artichokes too. Or garlic. or...you could almost name it. Tis great to be in a big city next to so much local produce. ;)

Appendum: They still can't grow chiles worth a damn though locally.