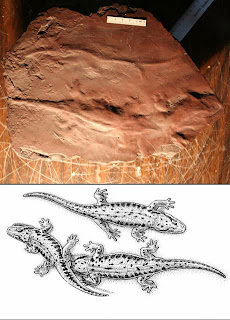 Unprecedented fossilized body imprints of amphibians have been discovered in 330 million-year-old rocks from Pennsylvania. The imprints show the unmistakably webbed feet and bodies of three previously unknown, foot-long salamander-like critters that lived 100 million years before the first dinosaurs.

"Body impressions like this are wholly unheard of," said paleontologist Spencer Lucas, a curator at the New Mexico Museum of Natural History and Science. Lucas will present the discovery on Tuesday, 30 October 2007, at the annual meeting of the Geological Society of America in Denver.

The fossil imprints, while lacking any bones of the animals, actually contain rare information that bones cannot, said Lucas. Without the imprints of the webbed four-toed feet, for instance, it would be virtually impossible to say they were truly amphibians. The imprints also provide body proportions and important clues to the kind of outer skin the little beasts had. The skin is smooth, not armor plated as many would have expected, Lucas said.

The imprints were found in reddish brown, fine-grained sandstone rocks of the Mauch Chunk Formation in eastern Pennsylvania that correspond to what's known as the Visean Age, an early part of the Mississippian Epoch. That, in turn, is part of the Paleozoic Era that stretched from 542 million years ago to 251 million years ago, when the age of reptiles started. The Mauch Chunk is older and therefore located beneath the heavily mined coal beds of Pennsylvania.

Also found in rocks from the same formation and of the same age are footprints of other relatively large animals and fossils of insects and plants, Lucas explained. There is even a saucer-sized footprint of an unknown vertebrate that suggests larger four-footed beasts lived far earlier than ever before suspected.

That's most of the article that I linked to, but here is the abstract.
Posted by Will Baird at Tuesday, October 30, 2007

My jaw just hit the desk. I'm not even kidding. That's...beyond amazing!

As you are a fan of amphibians, would you consider doing a post on Amphibian Ark? I have a lot of postings about that very important conservation campaign on my blog, http://frogmatters.wordpress.com. And the Amphibian Ark Web site is www.amphibianark.org. Thanks for considering.