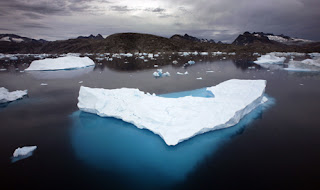 An already relentless melting of the Arctic greatly accelerated this summer—a sign that some scientists worry could mean global warming has passed an ominous tipping point.

One scientist even speculated that summer sea ice could be gone in five years.

Just last year two top scientists surprised their colleagues by projecting that the Arctic sea ice was melting so rapidly that it could disappear entirely by the summer of 2040.

This week, after reviewing his own new data, NASA climate scientist Jay Zwally said: "At this rate, the Arctic Ocean could be nearly ice-free at the end of summer by 2012, much faster than previous predictions."

Now, keep in mind he's speculating: he really doesn't know. It's possible, but who knows how likely it is. There's big error bars in our understanding still.

OTOH. If its true. Oh Shibbit with a blink tag.

My solution to the potential election of another religious wingnut is to expatriate...

Can't really apply that to this situation.

I've got a really ugly feeling in the pit of my stomach.

First off, there's no running away from global warming unless you happen to have a space habitat that's 100% self sufficient.

Secondly, the only way to fix something isn't to run away. It's to fightfightfight. Even if you lose a battle, you don't throw down your arms. You return for the next round.

We're not gonna have a fundie in office. Huckabee doesn't stand a chance against ANY of the Dems.

If we haven't learned anything else from the the past 8 years of this administration and both incompetent Congresses that we truly need to elect people with a freakin clue about governing.

Brian's wife Tracey has a soundbite up from Al Gore on her new blog The Olive Tree, and in response to my comment said that the middle of the US would never ever vote for anyone who said something bad about America. What these people don't realise is that yes, the US (along with a fair old bit of Northern Europe - and after all it was our industrial revolution that kick-started the whole snafu) is responsible. But the US could save the world if it put its mind to it. And wouldn't that be something?

US (along with a fair old bit of Northern Europe - and after all it was our industrial revolution that kick-started the whole snafu) is responsible.

Yes, we did. A lot of Americans that I know, if they are not outright rejectionists, are of the opinion that if we are going to have to take this route, then EVERYONE ought to. That China - whom is now producing as much CO2 as the US! - is not going to address carbon emissions, then it won't matter what we do: China with the per capita of the US circa 1990 is a disaster. N/M India or Pakistan or Indonesia or...

It's one atmosphere. There's no place to hide from this. ALL OF US are going to have to work to fix this and find other ways for the Third World to rise up to First World living conditions. It's just that we can't use the way we found for the current First World w/o possibly doing a Permian Extinction Mk II.

But the US could save the world if it put its mind to it.

No one has put it that way. It'd be an intriguing way of pulling off the necessary changes since it plays to our White Hat complex.

Personally, I strongly think we need to do everything that we can do fix global warming - even unilaterally! - but to avoid catastrophic global warming we have to have the whole world make the trip, not just us, not just Europe. I'm 100% for a combo carbon tax/tariff. I just don't see HOW to make that happen right now. :S

I guess I argued myself back to the Global Warming is Inevitable position.

Well, we see how wrong that prediction was! It's always fun to revisit old predictions and our preconceived notions about their likelihood/how they will occur.