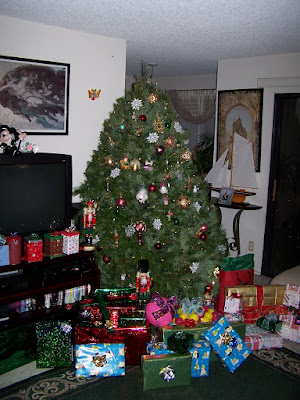 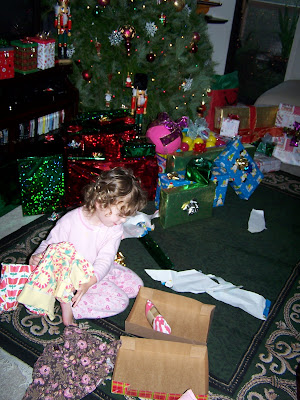 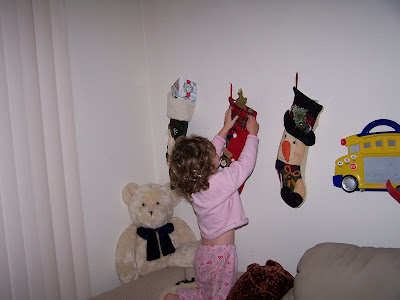 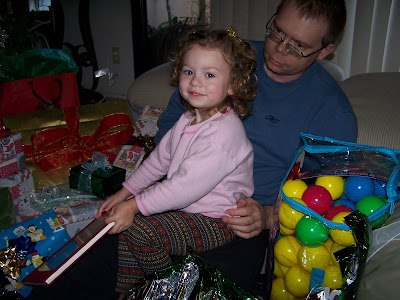 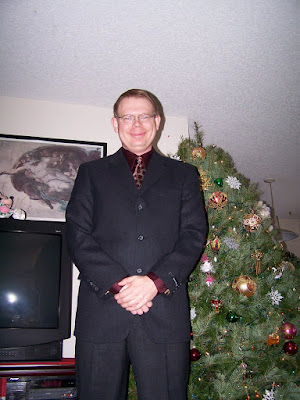 Why, yes, I have a Ukrainian wife, why do you ask?

A bit more seriously, the most magical moment of Xmas 2007 didn't happen in the morning. It was wonderful this morning when Avrora rushed out after waking up to the tree. Her excitement this morning was great.

The real treat though was that at 3 AM, she woke up. She was hungry - I think she's going through another growth spurt - and wandered out of the bedroom to the livingroom where we have the tree set up. Lyuda woke me up and sent me after her: no need for my daughter to start ripping into presents then! I found her standing there in the living room, eyes as big as saucers as she stared at the Xmas tree with its blinking lights and the gifts underneath. I asked her if she new Det Marose (Santa par russki w/ a bad transliteration) had been there. She nodded. I asked her if she liked the presents. She nodded. I told her it was probably a good idea to go back to bed because DM would take back the presents if she didn't. She was a little alarmed at this (hey! I only had an hour's sleep at that point! I needed to move things along), but insisted that she was hungry. I went and fetched some salami - her favorite snack - from the refrigerator and had her sit on my lap on the couch as the Christmas tree lights danced in front of us. No words were said, but her eyes never narrowed. She distractedly munched the meat and snuggled for a second. Then we went back to bed. Her only objection was that she didn't see any small presents: they all looked big! She wanted a small present so she could unwrap it herself. I reassured her and she climbed into bed with Mommy and Daddy with a shriek of delight and snuggled up to Lyuda as happy and delighted as only an innocent, Santa expecting child can.

Those ten minutes out on the couch, even though they were very sleep deprived, were something magical. I was touched in a way by my daughter's happy innocence at that moment that will be with me the rest of my life. If I had received de nada else, I would happily declared that I had made out the bandit in the Baird household and my daughter and wife like paupers even if they had each received all the money in the world. It was truly a wondrous gift. And I am humbled by its receipt.

MERRY CHRISTMAS TO ALL! AND TO ALL A GOOD NIGHT!

From: Papa Baird (aka local Santa stand in)
Posted by Will Baird at Tuesday, December 25, 2007

Email ThisBlogThis!Share to TwitterShare to FacebookShare to Pinterest
Labels: family