Ukraine has a New Prime Minister 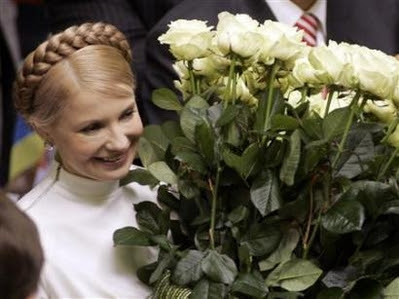 Tymoshenko, who confronted a powerful coalition led by outgoing prime minister Viktor Yanukovich, won 226 votes in the chamber, the exact number required to take office. Her adversaries took no part in the vote.

"Obviously it was a razor-thin victory...It shows how split parliament is and shows how split the coalition itself is," said Ivailo Vesselinov, an analyst with Dresdner Kleinwort.

"This means the government will be fragile. Any legislation and reforms - there will be a number of question marks. (Relations with Russia) won't be as bad as last time. She has moderated her rhetoric a lot."

That's putting it mildly. She was damned near doing an Ann Coulter (Slavic Variant) impression there for a while. Her rhetoric about punishing the eastern regions was pretty wild. Her quest for NATO and EU memberships is definitely on hold with THAT slim of a majority. We shall see if she ushers in anything other than a fractious period in Ukrainian Rada politics. We shall see.
Posted by Will Baird at Tuesday, December 18, 2007