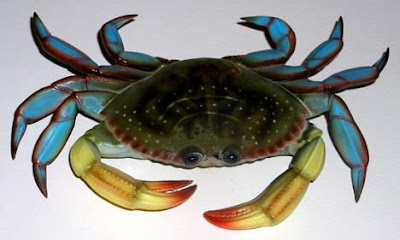 Work by researchers at North Carolina State University is leading to a new kind of crab harvest – blue crabs grown and harvested from freshwater ponds, instead of from the sea.

North Carolina's native blue crab population has been at historic lows since 2000. Dr. Dave Eggleston, director of NC State's Center for Marine Sciences and Technology (CMAST) and professor of marine, earth and atmospheric sciences, looked at various methods for helping the population recover. He hit upon a solution which not only reduces pressure on existing crab populations, but also benefits farmers looking to diversify their crops: using irrigation ponds on farms to grow blue crabs.

"We started out by catching small crabs in the wild and stocking them into farm ponds loaded with bass and bluegill predators, and were still able to get 12 percent survival," Eggleston says.

"So we teamed with the University of Maryland's Center of Marine Biotechnology who had the expertise to growth hatchery-reared blue crabs, and stocked these blue crabs in freshwater experimental aquaculture ponds at NC State's Vernon James Research and Extension Center in Plymouth, N.C., where the crabs exhibited some of the highest growth rates on record."

Eggleston then noticed that a lot of farmers in Eastern N.C. were trying to diversify their crop offerings in response to the decline in tobacco demand.

Mmmm....Crabs. I have to wonder if we might see a return to a multicrop farm? Monocultures are the norm these days, right?
Posted by Will Baird at Thursday, October 09, 2008