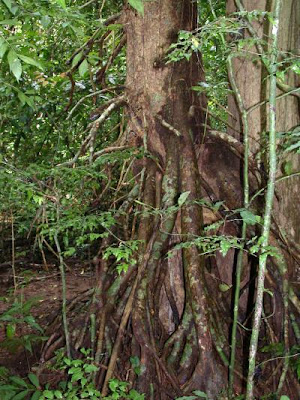 A "living fossil" tree species is helping a University of Michigan researcher understand how tropical forests responded to past climate change and how they may react to global warming in the future.

The research appears in the November issue of the journal Evolution.

Symphonia globulifera is a widespread tropical tree with a history that goes back some 45 million years in Africa, said Christopher Dick, an assistant professor of ecology and evolutionary biology who is lead author on the paper. It is unusual among tropical trees in having a well-studied fossil record, partly because the oil industry uses its distinctive pollen fossils as a stratigraphic tool.

About 15 to 18 million years ago, deposits of fossil pollen suggest, Symphonia suddenly appeared in South America and then in Central America. Unlike kapok, a tropical tree with a similar distribution that Dick also has studied, Symphonia isn't well-suited for traveling across the ocean---its seeds dry out easily and can't tolerate saltwater. So how did Symphonia reach the neotropics? Most likely the seeds hitched rides from Africa on rafts of vegetation, as monkeys did, Dick said. Even whole trunks, which can send out shoots when they reach a suitable resting place, may have made the journey. Because Central and South American had no land connection at the time, Symphonia must have colonized each location separately.

Once Symphonia reached its new home, it spread throughout the neotropical rain forests. By measuring genetic diversity between existing populations, Dick and coworker Myriam Heuertz of the Université Libre de Bruxelles were able to reconstruct environmental histories of the areas Symphonia colonized.

"For Central America, we see a pattern in Symphonia that also has been found in a number of other species, with highly genetically differentiated populations across the landscape," Dick said. "We think the pattern is the result of the distinctive forest history of Mesoamerica, which was relatively dry during the glacial period 10,000 years ago. In many places the forests were confined to hilltops or the wettest lowland regions. What we're seeing in the patterns of genetic diversity is a signature of that forest history."

In the core Amazon Basin, which was moist throughout the glacial period, allowing for more or less continuous forest, less genetic diversity is found among populations, Dick said. "There's less differentiation across the whole Amazon Basin than there is among sites in lower Central America."

The study is the first to make such comparisons of genetic diversity patterns in Central and South America. "We think similar patterns will be found in other widespread species," Dick said.

The extent of the tropical rain forests such as the Amazon during the glacial periods is an extraordinarily contentious subject in their study. Part of the reason is that the rain forests may have been very, very small pockets and the current Amazon rain forest as we know it is a very recent phenomenon that is a run together of many, many smaller forests. That has two points that cause irritation: 1. that might mean that the modern cut back can be recovered from in a very quick manner (1000 years or less, geologically quick, btw!) and two, the celebrated diversity of the Amazon and other tropical rain forests may be only temporary as the ecosystem sorts itself out between all those former isolated faunas now competing with one another. Both of those ideas are less than popular with some.