Huber on "A Hotter Greenhouse?" 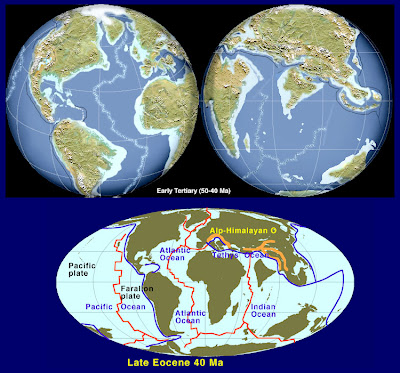 Half of Earth's surface area is in the tropics, so changes and uncertainties in tropical temperatures dominate any climate sensitivity estimate. If SSTs were truly ~35°C at times in Tanzania (19°S) or New Jersey (~30°N), some tropical regions must have been much hotter. This has thought-provoking implications for paleoclimate, vegetation, and carbon cycle evolution.

First, tropical temperatures above 31°C offer no evidence for a climate thermostat, that is, a strict mechanism that maintains tropical SSTs in the modern range; climate dynamicists trying for decades to explain thermostats may have been chasing a chimera. Second, climate models might be able to reproduce warm poles and warm extratropical continental winters, given that these new tropical SSTs imply closer to modern temperature gradients (5).

Third, during the warmest parts of the past 65 million years--that is, the Paleocene-Eocene Thermal Maximum (PETM) and subsequent brief, sudden "hyperthermal" phases of the Early Eocene Climate Optimum (17)--tropical vegetation may have been above the upper limits of its thermal tolerance (18). Most plants, especially the C3 plants that comprised Eocene floras, have physiological mechanisms that break down in the 35° to 40°C range (18, 19); in particular, they can die because photorespiration dominates over photosynthesis (18-20). Annual mean temperatures greater than 35°C can be plausibly reconstructed to have been widespread equatorward of 35° latitude (8, 9, 21, 22), so floras may have been thermally stressed, and perhaps undergoing water stress in the warmest intervals.There is some evidence of tropical floral extinctions during the warmest periods (23, 24), while forests thrived at higher latitudes.

This scenario may be a missing link in the hypothesis (25) that carbon cycle and climate changes during the PETM were caused by oxidation of the terrestrial biosphere. It is well established that a major tropical vegetation die-off in a global warming world has profound temperature, precipitation, and carbon feedbacks (20). Carbon cycle modeling (26) suggests that the terrestrial carbon pool could have been much larger than modern, ~6000 gigatons of carbon. The gradual warming preceding the PETM may have loaded a terrestrial carbon storage gun, and crossing the 35°C threshold may have triggered it. Tropical die-back after an initial warming (22) might have added thousands of gigatons of carbon into the atmosphere and further increased temperatures by radically reducing evapotranspirative fluxes that normally cool tropical landmasses. Tropical heat death helps resolve two mysteries: the magnitude of the carbon and climate excursion at the PETM, and the fact that these abrupt warmings occur during broader intervals of extreme warmth, rather than in cold intervals as expected from methane degassing (27).

The recent results suggest that, rather than being a stable cradle for tropical life, the tropics may have been a crucible; during warming, many taxa may have been forced to flee poleward, innovate, or face extinction (28). These far-ranging implications are a lot to place on the narrow shoulders of the few published proxy records, but they highlight the importance of the next challenge: collecting more tropical multiproxy records and establishing the accuracy of existing ones.

Dr Matt Huber of Purdue is someone I have spoken to on occasion about paleoclimate matters. We started to talk about doing a collaboration, but it fell apart when we were both not able to sync up. Alas. That said, he was looking into, a couple years ago, doing some simulations on the Pliocene. The world at that point had a climate of 2.5 C warmer than now. IDK if Matt ever got around to doing the simulations or not, but it seems someone else now has an interest. Unfortunately, Scotese lacks a Pliocene climate map. Otherwise I'd point you there. Well, the Miocene may not be that far off.

That said, it appears that the tropics are a highly unstable region ecologically. During the Pleistocene, it was shattered into small forests all over the place. During the Eocene, if Matt's hypothesis is right, the tropics became too hot for C3 plants to survive. This idea that the tropics have been radically unstable over time is interesting because it means that it would explain why the tropics always have the highest extinction rates: their environment rather than being the most stable is the most volatile. And due to the fact that most tropical critters are not large and the fossil record biases towards the largest critters anyways, this may explain why there are some questions about the which area has the highest origination rates.

That said, if the tropics of tomorrow are still wet and the temperatures that much higher, could we see the first great tropical forests of grass and succulents? That'd be interesting!

Hey, didn't the succulents originate in the tropics? I seem to recall as a child hearing that and it being something of a surprise. Perhaps this is why. The succulents present there now are survivors from a time when the tropics were more arid.
Posted by Will Baird at Monday, November 24, 2008

Will, for some reason I find this post rather disturbing. Vasty tropical deserts with daytime temperatures above 130 is the implication, right?

BTW, I'm interested in paleoclimatology ... but only just enough to greatly appreciate a translation of the articles. The prose requires more parsing by the uninitiated than you may realize.

Please request same on TPTM, should I fail to sufficiently translate stuff that you find interesting!

There are a few different possible scenarios that may come of this. 130 deg temperatures are likely, which would suggest a desert in our experience, but not necessarily. It does mean there will be no trees or other C3 plants, if Matt's hypthesis is correct. Grasses could continue to grow and be happy as a clam. Ditto for succulents. You could have a rolling grass plain. That is, if there is sufficient precipitation. Maybe something like a Tule or bamboo forest. Tropical style. Eventually. In our life times and our grandkids' life times, it'd end up a normal grassland, if hot.

However, however, the real question is of precipitation. The second biggest argument within the climate community - after how big the temperature jump is going to be - is what the shifts in precipitation is going to be. Are we headed for a drying out (NeoOligocene as James likes to call it) or a great wetting (NeoEocene). Which way it goes is really crucial.

NeoOligocene and much of the midWest US becomes a little desert. Ditto for the Amazonia. Possibly for Africa as well.

NeoEocene means everything gets really, really wet. Jungles in Wyoming type thing. Oh, except for China and places in the rain shadows, of course. Truthfully, I tend towards this camp.

Neither one is truly a 100% accurate. There will be drying in some places and wetting in others, but its a question of which of the two overall trends it will be dominant.

I actually have a rather long post I'm working on for a possible scenario of global warming for different locales. I finished the Anchorage, Alaska section. I was planning on a NM section next and then a NY/NE US. I'll probably toss in a NorCal section. It's going to be a loooong post, so don't expect it too soon.

No matter what, go visit the Everglades. It's a pretty doomed ecosystem that ought to be appreciated while its there. :(

Can you post what you've got about global warming scenarios?

I've been worrying about how bad it can get lately. Maybe the heatwave, or maybe the Senate. Or both.

Even on the other side of the Cold to Hot Tunnel.

I'll see what I can put together for you. It's a range of possibilities. Precipitation is the single most important aspect of this...and the one we have the least grasp of at this point.