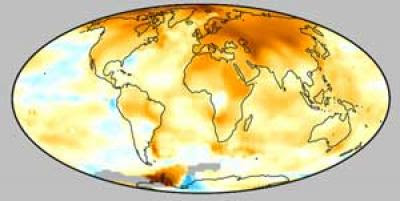 Rapid global warming marked the boundary between the Palaeocene and Eocene periods 55.6 million years ago, but how the temperature rise was initiated remains elusive. A catastrophic release of greenhouse gases from the Kilda basin could have served as a trigger.

The warm period known as the Palaeocene–Eocene Thermal Maximum (PETM) was a period of climatic turmoil that lasted more than 100,000 years1. Ocean temperatures increased by 3–10 °C, and atmospheric concentrations of methane and carbon dioxide rose sharply1. Meanwhile, the oceans became more acidic and the carbon isotopic values of marine carbonates declined significantly, a sign of a disrupted carbon cycle. These latter observations suggest that several thousand gigatonnes of isotopically light carbon must have been injected into the atmosphere–ocean system over the course of the event1, 2. Sources including the release of methane during the intrusion of magma into organic-rich sedimentary rocks, carbon dioxide outgassing from lava flows, and dissociation of methane gas hydrates in marine sediments2, 3, 4 have all been previously invoked in the perturbation — but we still do not know how much light carbon came from each source.

We are also unsure just what triggered the initial warming1, 2, 3, 4. More data on the environmental conditions of the PETM are becoming available, and it is now clear that the warming began several thousand years before the main disruption to the carbon cycle that is documented in the worldwide decrease in carbon isotope values5 often used to define the event. Therefore, the initial warming was probably a necessary precursor of the upheaval of the carbon cycle. Because, over a 20-year period, methane is 72 times more potent than carbon dioxide as a global warmer, a rapid injection of a relatively small amount of methane into the atmosphere could have caused the initial warming without leaving an identifiable isotopic signature. Mechanisms that have been suggested to provide such a methane burst include seabed hydrothermal activity and large submarine landslides3, 6.

Here we propose an alternative: we suggest that the early warming of the PETM was initiated by catastrophic expulsions of methane and also carbon dioxide that had accumulated over time in the stratified waters of the Kilda basin between Greenland and Norway, in a mechanism similar to that seen today in African rift lakes.

Link to paper at the top. I can get it for anyone that wants it. I'll read it and add comments later. Press release here.
Posted by Will Baird at Tuesday, July 14, 2009