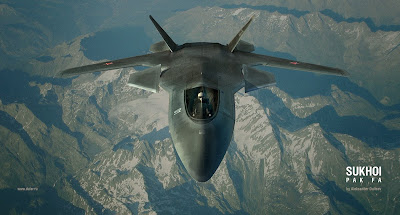 Not the real deal, just someone's renderings of their ideas on how the PAK FA will supposedly look. Dewline noted the designer, Alekander Dultsev. The quesiton remains whether or not there will be a PAK FA at all: after all, there was this Mig 1.44 that was supposed to be the Russian answer to the F-22. And then there was the LFI and then...The PAK FA is already 2 years behind schedule. It's rumored to be because of manufacturing issues. Russian aerospace industry age much in how many years since they designed a new fighter?
Posted by Will Baird at Wednesday, July 08, 2009

Well i think these russians have to take ideas from Indians like what they did in the development of the world's supersonic n hypersonic cruise missile BRAHMOS. I think India will be a better option for the russians to make their pakfa a complete stealth fighter & have an edge over f-22 & f-35

If I may, the Russians have had their defense industry decay massively in the past two decades. Lots of talent has been lost. Know-how is just gone. This is also not to mention all of the problems with the fact that the West has made enormous strides in miltech development in the mean time.

Material science is a prime example: the Russians haven't made NEARLY as much progress and a lot of that tech can't be imported.

The Indians would be better served at this point to invest in their own or collaborate with/buy from the West. The French would probably jump at the chance and give generous tech transfer (re Brazil) as well as help develop a 4th gen fighter.