Why Global Warming is Inevitable

Chinese officials recently have stated that China will not accept any binding limits on its emissions until at least 2050. Instead, they have cited the government's plan to achieve relative improvements by reducing the amount of energy expended per unit of economic output by 20 percent by 2010. But China has made little progress toward that goal since it was adopted two years ago. Last week, the Chinese government released data showing that electricity consumption by residential, commercial and industrial sectors -- a key barometer of emissions -- rose by 15 percent in the first three months of this year on a year-to-year basis.

The US is the current and future bad guy in the political circles. We're just plain unpopular in oh-so-many ways these days. One of them is wrt to global warming and the emission of green house gases. We're the largest emitter and have been historically. We get bashed on repeatedly, fairly or not, for that. However, the US will shortly not be the worst offender.

China was originally projected to overtake the US in the late 2010s as the worst emitter of green house gases according to past reports. However, it's now evident that China will over take the US in a couple years at most. As China converges with the US and West in general for per capita wealth, it's emissions will go radically up just based on its overwhelmingly larger population. Additionally, China has vowed to not do anything binding for its emissions for another four decades! If it's emissions scale linearly with the economic output by China - and they probably don't btw - we will see around 22 times the CO2 output of the US by then just by China! Then there's India. 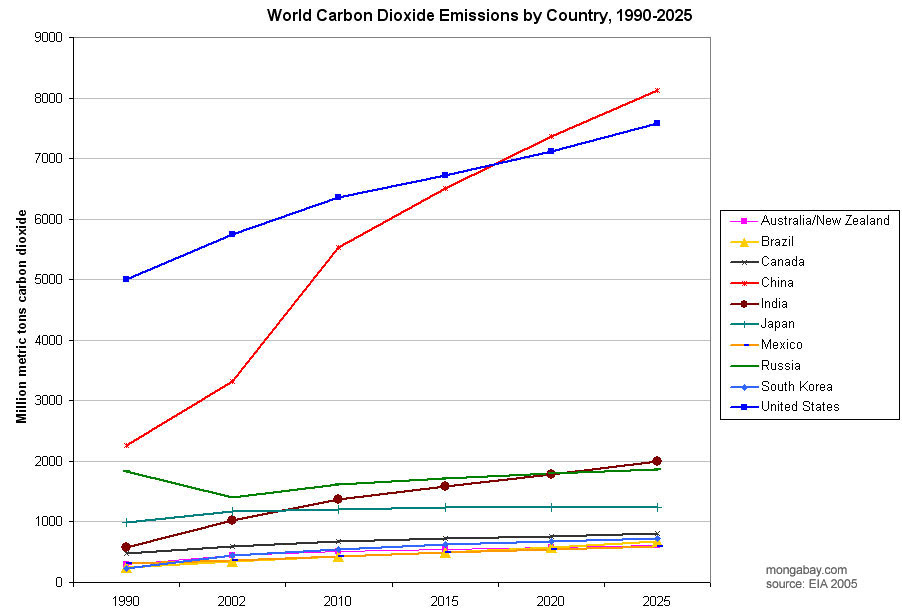 India's carbon dioxide emissions are not as great as Russia's, as yet, but sometime in the next ten years will be and make it the third greatest contributor. If the Indian economy grows and even puts out half the CO2 per capita as America does, then there is going to be a huge problem just based on the massive population.

With the fact that three of the four worst contributors to green house gas emissions is unwilling to regulate those emissions, and that even with the propaganda/informational campaign here in the US making good progress to convince the public that global warming is a serious threat, the rise of India and China in an unregulated fashion will simply overwhelm any net reduction by the USA.

Face it, folks! Global warming is inevitable. It's time to adapt, not to pretend we can stop the juggernaut. We just changed the world. It's not the call of doom. It's not the end of the world. It is just changing and we're the cause. We can make it a lot worse, but denying it, claiming that if we simply mumble the right incantations, will make it better is delusional at best.
Posted by Will Baird at Tuesday, May 08, 2007

The power required to pump a million tons of air a second (and, at 500ppm, it has to be something of that order) through CO2-removing beds is going to be inordinate, but there is no shortage of granite in central Canada, nor shortage of thorium in granite; once the pipeline is filled I would expect the EU to be able to build a gigawatt of nuclear power station a week at the cost of a modest but interminable war. Which might if we're lucky suffice.

Or is Rachel Carson right and we're already swinging back in the "cooler" direction?