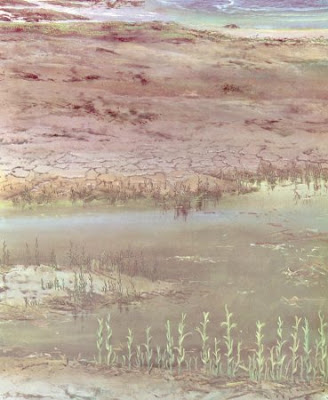 New research reveals how the arrival of the first plants 470 million years ago triggered a series of ice ages. Led by the Universities of Exeter and Oxford, the study is published today (1 February 2012) in Nature Geoscience.
The team set out to identify the effects that the first land plants had on the climate during the Ordovician Period, which ended 444 million years ago. During this period the climate gradually cooled, leading to a series of 'ice ages'. This global cooling was caused by a dramatic reduction in atmospheric carbon, which this research now suggests was triggered by the arrival of plants.
Among the first plants to grow on land were the ancestors of mosses that grow today. This study shows that they extracted minerals such as calcium, magnesium, phosphorus and iron from rocks in order to grow. In so doing, they caused chemical weathering of the Earth's surface. This had a dramatic impact on the global carbon cycle and subsequently on the climate. It could also have led to a mass extinction of marine life.
The research suggests that the first plants caused the weathering of calcium and magnesium ions from silicate rocks, such as granite, in a process that removed carbon dioxide from the atmosphere, forming new carbonate rocks in the ocean. This cooled global temperatures by around five degrees Celsius.
In addition, by weathering the nutrients phosphorus and iron from rocks, the first plants increased the quantities of both these nutrients going into the oceans, fuelling productivity there and causing organic carbon burial. This removed yet more carbon from the atmosphere, further cooling the climate by another two to three degrees Celsius. It could also have had a devastating impact on marine life, leading to a mass extinction that has puzzled scientists.
The team used the modern moss, Physcomitrella patens for their study. They placed a number of rocks, with or without moss growing on them, into incubators. Over three months they were able to measure the effects the moss had on the chemical weathering of the rocks.
They then used an Earth system model to establish what difference plants could have made to climate change during the Ordovician Period.

I've heard this put forward for the Devonian, but not the Ordovician. For that matter, the Azolla Event is another proposed biologically driven climate change. We'll see how this plays out. The timing is...tough...to prove, but we do know that life even nonsapient/sophont does impact climate.
Posted by Will Baird at Wednesday, February 01, 2012