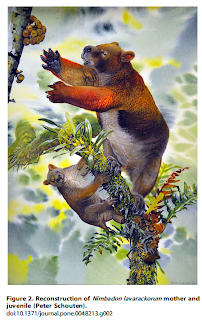 The marsupial family Diprotodontidae (Diprotodontia, Vombatiformes) is a group of extinct large-bodied (60–2500 kg) wombat-like herbivores that were common and geographically widespread in Cenozoic fossil deposits of Australia and New Guinea. Typically they are regarded to be gregarious, terrestrial quadrupeds and have been likened in body form among placental groups to sheep, rhinoceros and hippopotami. Arguably, one of the best represented species is the zygomaturine diprotodontid Nimbadon lavarackorum which is known from exceptionally well-preserved cranial and postcranial material from the middle Miocene cave deposit AL90, in the Riversleigh World Heritage Area, northwestern Queensland. Here we describe and functionally analyse the appendicular skeleton of Nimbadon lavarackorum and reveal a far more unique lifestyle for this plesiomorphic and smallest of diprotodontids. Striking similarities are evident between the skeleton of Nimbadon and that of the extant arboreal koala Phascolarctos cinereus, including the powerfully built forelimbs, highly mobile shoulder and elbow joints, proportionately large manus and pes (both with a semi-opposable digit I) and exceedingly large, recurved and laterally compressed claws. Combined with the unique (among australidelphians) proportionately shortened hindlimbs of Nimbadon, these features suggest adept climbing ability, probable suspensory behaviour, and an arboreal lifestyle. At approximately 70 kg, Nimbadon is the largest herbivorous mammal to have occupied the forest canopies of Australia - an ecological niche that is no longer occupied in any Australian ecosystem and one that further expands the already significant niche diversity displayed by marsupials during the Cenozoic.