Contiguous Late Permian to Early Triassic Strata Preserved in US? 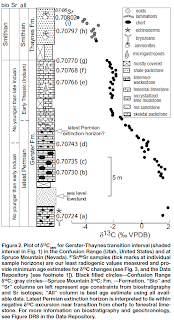 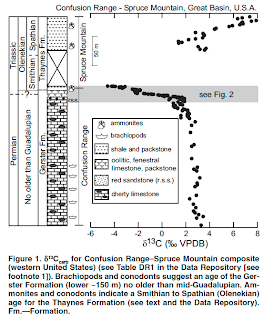 Although the latest Permian mass extinction and associated δ13C excursion are well documented from the Tethys Ocean, carbonate rocks preserving these events in the eastern Panthalassic Ocean (western Pangea) are unknown. We present δ13Ccarb from the Gerster and Thaynes (Permian and Triassic) Formations in the western United States and document a negative excursion with no evidence for major breaks in continuity. To further constrain the age of the δ13Ccarb excursion in the absence of index fossils, we analyzed the same samples for 87Sr/86Sr. When examining our new carbon and Sr data in the context of biostratigraphy and sequence stratigraphy, we conclude that parts of the western United States may preserve carbonate successions that span the latest Permian extinction.


Hat tip Chinleana.
Posted by Will Baird at Tuesday, February 19, 2013