The Paleo Recipe for Complex Life on Earth

Let's step back through deep time to consider an intriguing event. One which has been written about, but far from sufficiently and its existence could have some pretty profound implications about Earth and life's history. 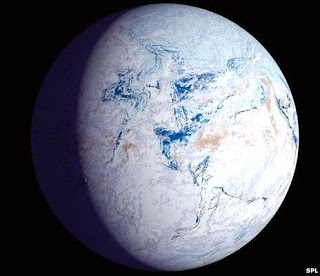 Looking back to the Precambrian.

The Earth is racked by global glaciations.  Ones which have been called the Snowball Earth.  They stretch over the entire planet from the poles through the equator.  There is some dispute whether or not the oceans were completely frozen over (a slushball earth vs snowball), but the glaciations are acknowledged as real.

The monstrous glaciation is understood to have been triggered by a sudden drop in the atmospheric carbon dioxide levels.  This, in turn, is believed to have been caused by photosynthetic organisms drawing down the CO2 levels while spiking the oxygen levels (relatively speaking).  Yes, the snowball earth events are, like in the Eocene's Azolla Event, examples of biogenic climate change.

Within 100 million years of the end of the Snowball Earth complex life arose.  Except it would vanish from the fossil record, probably having gone extinct and changing the biological fate of the Earth.

Wait.  You thought I was talking about the Cryogenian and Ediacaran?

After all, the Cryogenian's Marinoan Glaciation (or maybe Sturtian or Kaigas), NeoProterozoic Oxygenation Event, Ediacaran with its biota and then Cambrian do parallel all of the above.  Except that complex life is obviously still around and the Phanerozoic is quite biologically diverse, to say the least.

But, no, despite the parallels, I am not talking about the rise of modern complex life.  Rather I am talking about events which took place more than a billion years earlier, during the PaleoProterozoic.

There has been up talk of the Great Oxygenation Event.  This is when life puped out oxygen in sufficiently large quantities oxygen were poured into the atmosphere by photosynthetic life, namely something like the cyanobacteria.  This may have been one of the first mass extinctions because obligate anaerobes cannot survive in the presence of oxygen, for one, and for the second, it radically changed the climate.

By pulling down the carbon dioxide and releasing free oxygen, the cyanobacteria tipped the earth from a greenhouse climate to an icehouse climate.  This in turn, without the 'modern' feedback loops, turned into what is suspected to be the earliest Snowball Earth, during the Siderian and Rhyacian.  This glaciation, called the Huronian, lasted (as far as we can tell) for 300 million years, from the mid Siderian to about 50 million years before the end of the Rhyacian.

In 2010, a remarkable find was brought to light from Gabon, Africa.  There appeared to be colonial, or even possibly true complex life in the Rhyacian.  Further study of the fossils strongly suggested they were some form of complex life.  However, strangely, not like our complex life which seems to have arisen piecemeal during the Cryogenian into the Ediacaran and exploded during the Cambrian.  The timing of the appearance of the Francevillian Biota 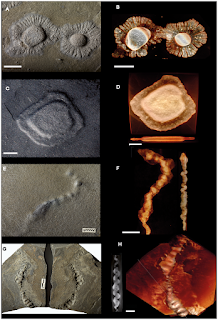 The Francevillian Biota has several biotic members.  Its easy to see some physical parallels between the Ediacaran Biota members and those above.  There are forms which are reminicent but not the same as the Edaicaran discoid, Dickinsonia and rangeomorph fossils.  They are not the same, by any means, but the suggested parallels are interesting.  No, I am not saying the Ediacaran forms evolved form the Rhyacian!  Quite the contrary!  Rather, I am suggesting there is an event of parallel evolution taking place.  Independently.  Form follows function.  However, this is more suggestively so than closely (unlike the classic of sharks, ichthyosaurs and dolphins), but what's even better of a parallel is the events which led up to the both the evolution of the Francevillian and Ediacaran Biotas.

The events of the two different time frames, Siderian/Rhyacian & Cryogenian/Ediacaran (global glaciations, O2 spike and the seeming rise of complex life) is pretty exciting.  Is this what it would take to have Earth-evolved life to produce complex life forms?  Perhaps.  Its worth looking into.  However, the huge question becomes, if complex life evolved 2.05 billion years why is there a hiatus for over a billion years.  Those years sometimes being called the Boring Billion (more properly, the MesoProterozoic).  During that time frame, we have evidence of microbial life, but nothing like an animal or plant.  So?  What happened?  It must have gone extinct.  There are two possible explanations, assuming this is in fact complex life in the Francevillian Biota.

One is the Francevillian Biota didn't produce a proper Gaia-like feedback system and they tipped over into a feedback loop which caused them to ruin their own environment.  Or rather they ran out of their nutrients.  Or failed to develop a self sustaining ecosystem.  Its a biological failure then.  Producing Gaia is hard.  At best its 50-50 proposition of true.

The second possible reason is even more compelling.  Why?  Because of the time and energy involved.  27 million years after the Francevillian fossils were deposited, one of the biggest asteroid impacts the Earth has seen since the Late Heavy Bombardment took place.  And 150 million years after that, a comparable asteroid smashed into the world.  Both of these impacts dwarf the Chicxulub Crater. 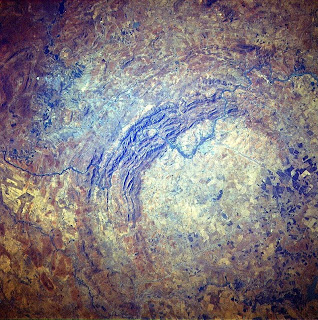 It has already been established giant impacts can cause mass extinctions.  The impact in Chicxulub, Mexico 66 million years ago, wiped out 50% of life on the planet.  The KT or K-Pg Extinction made way for our modern ecology and our own evolution.  The Chicxulub impact was the equivalent of over 100 teratons of explosives, roughly over 1000 times the combined nuclear arsenals on Earth.  There are two impacts which followed the Francevillian Biota which were significantly more powerful.

The Vredefort Impact took place 'first.'   The astrobleme for Vredefort is in southern Africa and dates to 2.023 billion years ago.  The crater it left was 300 km in diameter: Chicxulub is 'only' 180 km in diameter.  The impact would have been significantly more energetic than Chicxulub.  This is guaranteed mass extinction.  In fact, its a significantly more devastating mass extinction because the Francevillian Biota is almost assuredly younger and less robust than when our lineage dating from the Cryogenian took it in the shorts from Chicxulub.  Had Chicxulub happened before the Cambrian Exoplosion, its probable there wouldn't be anything remotely complex on the planet.  Vredefort was worse.

As if Vredefort was not enough, 150 million years later, circa 1.849 billion years ago, came the Sudbury Impact.  It was of a comparable energy and bollide size. If any thing complex survived the Vredefort, which would be doubtful, the Sudbury almost assuredly finished them off.  The two impacts, btw, bracket the Orosirian Period.

Interestingly, a paper which just came out supports the scenario.  Although the authors are studying about two different impacts at an earlier time, they found geological evidence of the upper sea boiling from the devastation wrought.  The Sudbury and the Vredefort Impacts both have the potential to done the exact same thing.  Given the Francevillian Biota was a shallow water assemblage, its entirely likely they were wiped out in one or both of the events.

The surviving largely microbial life would trundle on in a relatively stable environment for another billion years thence. 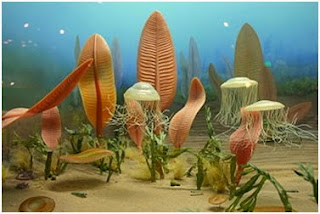 Every Earth Deserves a Second Chance

Assuming the Francevillian Biota was, in fact, complex life, Earth would need another billion years until the Ediacaran to take another stab at complex life.  This time it would be successful and continue into the present, despite mass extinctions.  Fortunately, there have been no bollides of comparable mass or energy as the Vredefort or Sudbury since.  Their descendents are us.

The hypothesis we had extremely distant cousins makes for some interesting conjectures.
The story outlined above, the hypothesis which I've hung out there in my first paleo post in some time, hangs together quite well in view of the science.  However, it needs to be tested.  We can only test the hypothesis by finding other locales similar to Franceville.  Likewise, a lot of detailed examination of the Francevillian Biota as known is needed. Likewise, deposits from after Vredefort and in similar paleoenvironmental conditions are needed from the Orosirian.
Then what's needed is to understand why the MesoProterozoic didn't have any glaciations and, thus, did not produce the complex life as we (squintingly) know it earlier.
Posted by Will Baird at Friday, May 08, 2015

So fascinating. Pitty it died out, as far as we have yet found, before it was far enough along to conjecture about what that lineage of complex life would have turned into. Would it have converged into a billion years younger mirror of our current world, or been radically different? Can complex life stall out before reaching our level of complexity, without these sort of shake up events to re-shuffle the ecosystems and lineage decks? Or is it destined to grow more and more complex once it arises as long as it isn't whacked out of existence too soon?

Some really fun food for thought. Thanks for sharing.

And as for whether or not it'd be convergent with the rest of terrestrial forms and life...well, to some extent, but if there's anything we've seen, its that while somethings will look alike from the 50k ft level, the details are radically different.