Once Upon the Permian: Therocephalians, the Near Mammals Before Mammals 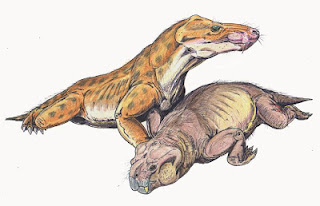 It has been a long time since I wrote a therapsid post.  Part of the problem is there are two groups I find the most fascinating and want to write about.  However, they are incredibly diverse.  Far, far more so than either the dicynodonts or the gorgonopsids.  While the former filled niches of herbivores from those like gophers to giant cattle or rhinos and the latter were carnivores filling top or middle predator niches, the others fill virtually everything.    Herbivore, carnivore, omnivore, aquatic, arboreal, flying and more.  So, it's really hard to do a single post for them.  Those groups are the therocephalians and the cynodonts.  The latter encompass our modern mammals.  Some day, I'll get the cynodonts, but not today.  Today, I'll be covering the therocephalians.

While the therocephalians are somewhat known from a couple of appearances in the popular media, in Primeval and Walking With Monsters, they are largely unknown in truth.  They were large and small.  Sabre toothed top predators and rodent-like herbivores.  They had a far greater range of bauplans than did either of the other two groups I have written about.

Therocephalians ("beast heads") were the sister clade to cynodonts ("dog teeth"): meaning they are very closely related.  Cynodonts were the lineage that gave rise to and encompasses mammals.  Early on they were almost exclusively carnivorous, but after the Permian Mass Extinction they would go on to fill even more roles.  They would develop a number of traits in parallel to the cynodonts.  So much so, that it was long thought they were the ancestors of mammals through the Bauroids rather than cynodonts. Some of those features were the secondary palate, phalanges like those of mammals, evidence of warm bloodedness and even whiskers.

The therocephalians existed from the Middle Permian (Capitanian) through the early Middle (Anisian) Triassic.  They diversified after the Guadalupian Mass Extinction, along with many other advanced therapsid forms, survived the Permian Extinction and then made it into the early Middle Triassic.  They seem to have been victims of whatever changed over the ecology from being a mix of therapsids and archosaurs in the megafauna to an archosaur dominated megafauna in the Late Triassic.  Some have speculated they were merely outcompeted by cynodonts and the rising archosauriformes.  They are last recorded in Namibia during the Anisian Triassic with Microgomphodon.

Therocephalians were fairly common.  They seem to have been discovered on all continents save North America.  They appear to have evolved in Gondwana and spread.  They survived, as far as we can tell, last in what is now southern Africa.

They varied in size from as small as about 3 1/2 inch Microgomphodon up to the estimated giant 3m (10 ft) long Megawhaitsia.  Most seemed to be around 1.5m (5 ft) long though, but later species were much smaller.

There were many clades 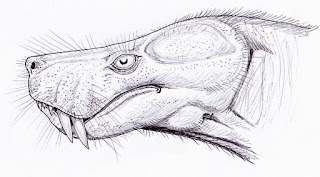 The earliest and basal most (sorta, most primitive) were the Lycosuchidae.  These "wolf crocodiles" were the earliest known therocephalians living during the Capitanian.  The most famous was, of course, Lycosuchus. While distinct, Lycosuchus has similar to the gorgonopsids.  However, one of the distinct features was the double canines.  There have been a lot of arguments over whether or not the double canines are a case of tooth replacement being seen in the fossil record, a defect in that particular animal or a true feature of the animal throughout its life.  Lycosuchus was fairly large, being 1.2m (almost 4 ft) long.  Simorhellia appears to be a close relative. 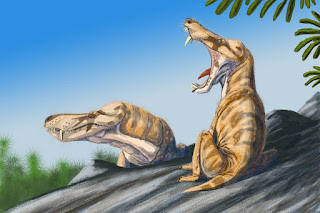 Scylacosaurus and its relatives in Scylacosauridae were the next most basal of the therocephalians.  Glanosuchus is one of the most famous of group and has the beginnings of many of the more advanced features that the therocephalians would develop in convergent evolution with the cynodonts and mammals.  Most of this group were large-ish carnivores being about 1.5 meters (5 ft) in length, roughly the length of a large wolf.

The remaining clade of the basal therocephalians is Trochosuchidae. These were similar to their cousins, the Scylacosauridae and Lycosuchidae. They lacked the crest on the skull of scylacosaurs, had a broader, more flatten skull and only had one, large canine tooth (yet for some reason many of the popular drawings have them with two.  odd that).

Eutherocephalia, the "true beast heads" were the clade that could be described as more derived than the earlier, basal clades.  It was even more mammal like than its predecessors and is divided into several subclades as well: Akidnognathidae, Hofmeyriidae, Whaitsiidae, Baurioidea and others. We'll discuss, briefly, Akidnognathidae, Nanictidopidae, Whaitsiidae and Baurioidea.

Akidnognathidae is often the clade thought of if and when someone thinks of the therocephalians.  They encompassed the sabre toothed and much studied Moschorhinus and the famous Euchambersia, notable for being potentially venomous.  Moschorhinus is the most heavily studied of the group and survived the Permian Extinction.  After the extinction, it became smaller, demonstrating the so-called Lilliput Effect and developed even larger canines, becoming more sabre toothed than before.  Euchambersia was famous for being sorta portrayed in Walking with Beasts for having a poisonous bite.  That's controversial, to say the least, but it did have the grooves in its canines and a socket above for a poison gland consistent with venomous animals.  Akidnognathidae was fairly large, often about 1.5m (5 ft in length).  While members survived the Permian Extinction, most of its diversity was wiped out and it did not last long after.  In many ways Akidnognathidae appeared to be convergent with modern carnivores for its bauplans and niches. 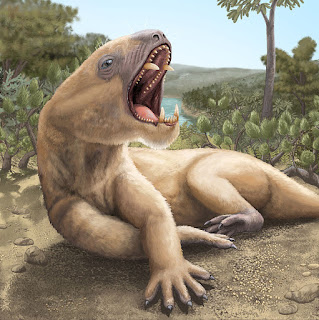 Nanictidopidae is another clade of eutherocephalians.  They are notable for their distribution, found so far in South Africa and Russia, but also because they appear to be the first therocephalians to have become herbivores during the Late Permian.  They had reduced canines and tooth wear consistent with herbivory.  Their skulls were more robust and trianular than other eutherocephalains of their time and this has been suggested as support for herbivory as well.  Their skulls were about 20 cm in length and if their bauplan was consitent with other therocephalians, they were not small and had an overall length of 120 cm (4 ft). 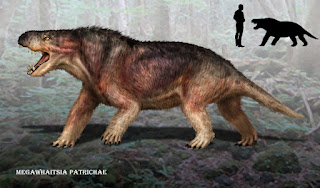 Whaitsiidae is another notable clade within eutherocephalia.  They were general carnivores and around 1 meter in length.  Interestingly, they have 5 upper incisors and then 4 lower.  However, the most notable bit is one of its members (Megawhaitsia) is the largest therocephalian found to date: the maximilla found in Russia makes for an estimated skull length of up to 50 cm.  If the body plan follows that of other whaitsiids, then the body length is around 3 meters.  Since it lived during the time of the Gorgonopsids, it makes you wonder if they were locally absent for Megawhaitsia to become so large.

The last group of eutherocephalians I will be covering is the Baurioidea.  There is no way I can do any credit to this diverse and interesting group.  They tended to be small and they developed into near mammals.  Some were convergent with rodents (Bauria, Microgomphodon) and others started reconverging with the larger sabre toothed forms that had gone extinct (Nothogomphodon), but it might be better to call it a sabre-toothed badger.  They were herbivorous (Bauria et al) and carnivorous (Nothogomphodon).  They survived the Permian Extinction and even diversified during the disaster taxa stages, the earliest Triassic.  They were also the smallest therocephalians of any stripe: Microgomphodon was 9 cm (3.6 in) long.  The largest of them, Nothogomphodon, was around 50 cm long (20 inches). 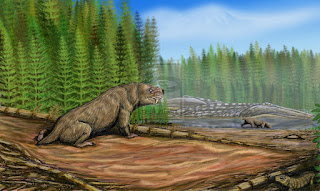 The therocephalians lasted for at least 20 million years.  Its likely we have not found the last of species they had, given there was a dicynodont recovered from the Australian Cretaceous, nor have we found the earliest of them either.  They had a good run.  However, for all their mad evolutionary innovation, it ought to be remembered, 20 million years from now in the past is in the Miocene Neogene for us.  Its a relative blink of time and yet they evolved and changed in some radical ways.  They were as big as short-faced bears to as small as a mouse.  They were aquatic like otters and were mini rodents and the amongst the largest of carnivores.  They were amazing in their own right.  Unfortunately, they are incredibly diverse and ought to have their own post like the dicynodonts and gorgonopsids for each of the clades given what we know, but, alas, I am a rocket scientist and ought to get back to that fun paperwork.
Posted by Will Baird at Wednesday, September 02, 2015