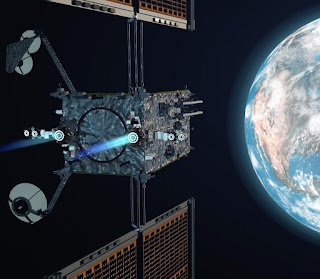 In a talk at the Florida Institute of Technology on Thursday, NASA administrator Jim Bridenstine announced that Maxar Technologies will build the first stage of NASA’s planned Lunar Gateway.

The Gateway, part of NASA’s larger Artemis program to return to the moon, is meant to be a waystation of sorts placed in a long orbit around the moon. It will provide a habitat for astronauts while they prepare to embark on longer missions, including moon landings, and serve as a place to assemble the components of rockets and other equipment in space.

The first element to be built and tested is a propulsion system, to move it between orbits and make sure it doesn’t drift away. Maxar (a new company formed from several veteran space industry players) is being awarded up to $375 million to build the system, which will convert solar power to electrical energy to power the Gateway, as well as provide propulsion, communication, and docking capabilities.

Maxar won because of the cost different (almost $200M) and willingness to accept NASA T&Cs on the contract without further negotiation on the matter.
Posted by Will Baird at Friday, May 31, 2019