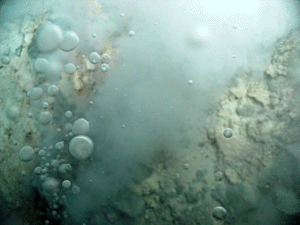 The first evidence that millions of tons of a greenhouse gas 20 times more potent than carbon dioxide is being released into the atmosphere from beneath the Arctic seabed has been discovered by scientists.

The Independent has been passed details of preliminary findings suggesting that massive deposits of sub-sea methane are bubbling to the surface as the Arctic region becomes warmer and its ice retreats.

Underground stores of methane are important because scientists believe their sudden release has in the past been responsible for rapid increases in global temperatures, dramatic changes to the climate, and even the mass extinction of species. Scientists aboard a research ship that has sailed the entire length of Russia's northern coast have discovered intense concentrations of methane – sometimes at up to 100 times background levels – over several areas covering thousands of square miles of the Siberian continental shelf.

In the past few days, the researchers have seen areas of sea foaming with gas bubbling up through "methane chimneys" rising from the sea floor. They believe that the sub-sea layer of permafrost, which has acted like a "lid" to prevent the gas from escaping, has melted away to allow methane to rise from underground deposits formed before the last ice age.

They have warned that this is likely to be linked with the rapid warming that the region has experienced in recent years.

It'd be nice to see another source for the information. Methane is a far more dangerous greenhouse gas than carbon dioxide is...however, it doesn't last nearly as long.
Posted by Will Baird at Wednesday, September 24, 2008