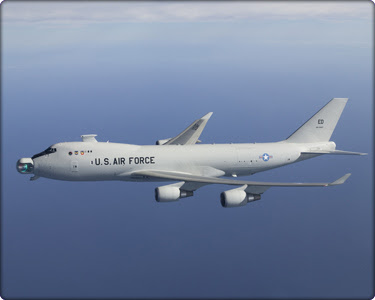 The high-energy laser installed earlier this year on the Missile Defense Agency's Airborne Laser (ABL) aircraft fired successfully Sept. 7 in a ground test at Edwards Air Force Base, Calif. Northrop Grumman Corporation under contract to The Boeing Company, ABL's prime contractor, designed and built the megawatt-class laser, the most powerful directed energy weapon ever developed for airborne use.

Called "first light," the lasing or test firing proved that the laser is ready to demonstrate power output sufficient to destroy a ballistic missile in flight. The firing of the Chemical Oxygen Iodine Laser (COIL) from its permanent home aboard the ABL aircraft followed a recent series of activation tests and once again validated the integration, operation and control of the six laser modules that form the core of the flight laser and their associated optics.

"We're very confident in the ability of the high-energy laser to shoot down multiple missiles from a single platform as part of a directed energy weapon system," said Alexis Livanos, corporate vice president and president of Northrop Grumman Space Technology sector. "The ABL team has successfully demonstrated the technology and moved us another significant step closer to shooting down a ballistic missile."

Future firings with longer duration are planned as ground testing continues throughout the remainder of this year. Those will be followed by flight tests of the entire ABL weapon system, culminating in an airborne intercept test against a ballistic missile scheduled for 2009.

They are so far behind schedule. Did I mention they're waaaay over budget?

My other knocks on the ABL: it's a chemical laser. ChemLasers are bad, m'kay? Espeically on a battlefield. While its not as nasty as a DF laser, a COIL will still kill you if there's a leak or some other method of major spill. It's also likely to be eclipsed in the next three years by solid state lasers.

The good things: this has potential to be a whole lot more than a missile killer. See that fighter...buhbai! That obnoxious spy sat? Blinded, possibly permanently. Oh yeah, it can hit missiles too. With the right software upgrades, probably even the missiles gunning for it in the front 180 deg arc. You could shoot artillery out of the sky, but that'd be a waste of an asset like this.

A step, albeit a sideways one, towards "It flies: it does."
Posted by Will Baird at Tuesday, September 09, 2008