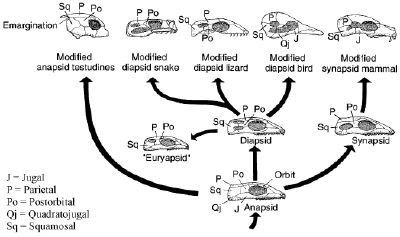 I found this while googling for something else. I was under the impression that anapsids were no longer considered basal most due to some dna testing found that turtles are derived diapsids. What that does to the other anapsids place in the world, IDK. In fact, many books/papers I have read have brought that up making it sound as though there are exceedingly few Permian anapsid specialists. Anyone really know?
Posted by Will Baird at Wednesday, September 24, 2008

Don't listen to the molecular biologists. Turtles as diapsids is actually based on virology or something (last I read). I prefer the morphological record myself, which says that turtles are anapsids.

Also, there's a talk at SVP this year about turtles that should elucidate some of their more bizarre anatomical features. Can't say more because of an embargo, though.

MB wrt to phylogenetics should NEVER just be dismissed. Even when it runs very contrary to what we believe.

Now, a quick google has turned up some info that is from cladists, I think, in support of this, too.

THE traditional classification of reptiles is based on a single key character, the presence and style of fenestration in the temporal region of the skull. Snakes, lizards, crocodiles, dinosaurs and others are 'diapsids', in that they have (at least primitively) two holes in the temporal region. Reptiles in which the skull is completely roofed, with no temporal fenestration, are the 'anapsids'. These include many Palaeozoic forms such as captorhinomorphs, procolophonids and pareiasaurs, but also include Testudines (turtles and tortoises). Consistent with this assumption, recent analyses of the affinities of Testudines have included Palaeozoic taxa only, placing them as akin to captorhinomorphs1 or procolophonids2 or nested within pareiasaurs3,4. Here we adopt a broader perspective, adding a range of Mesozoic and extant taxa to the analysis. Our result robustly supports the diapsid affinities of turtles, and so requires reassessment of the use of turtles as 'primitive' reptiles in phylogenetic reconstruction. More generally, it illustrates the difficulties of treating groups, such as the Testudines, that have extant members with peculiar morphologies that mask phylogenetic affinity; the hazards of relying on key characters such as temporal fenestration, which may mislead; the problems of outgroup choice for wide-ranging, inclusive analyses that include data from Recent and extinct groups; and the difficulties of judging the value of parsimony when applied to such inclusive analyses.

I have the letter. I'll be reading it later.

Another cladistic analysis suggested that the anapsids and diapsids are sister groups:

A new phylogenetic analysis of early amniotes based on 124 characters and 13 taxa (including three outgroups) indicates that synapsids are the sister-group of all other known amniotes. The sister-group of Synapsida is Sauropsida, including Mesosauridae and Reptilia as its two main subdivisions. Reptilia is divided into Parareptilia and Eureptilia. Parareptilia includes Testudines and its fossil relatives (Procolophonidae, Pareiasauria and Millerettidae), while Eureptilia includes Diapsida and its fossil relatives (Pakothyris and Captorhinidae). Parts of the phylogeny are robust, such as the sister-group relationship between procolophonids and testudines, and between pareiasaurs and the testudinomorphs (the clade including procolophonids and testudines). Other parts of the new tree are not so firmly established, such as the position of mesosaurs as the sister-group of reptiles. The new phylogeny indicates that three major clades of amniotes extend from the present to the Palaeozoic. These three clades are the Synapsida (including Mammalia), Parareptilia (including Testudines), and Eureptilia (including Sauria). In addition, the Procolophonidae, a group of Triassic parareptiles, are the sister-group of Testudines.

It may be that the anapsids are just more derived than the diapsids. It's not the traditional view, but it does have some sort of support in the cladist groups. If there are cladists that support it AND the MBs do...dontcha think we shouldn't give it a second look?

Hmmm...didn't realize there was so much phylogenetic backing to the idea. Honestly, I've been interested in "turtles are diapsids" since it was first suggested, but all I've read are MB studies, which I detest. Genetic clocks are extremely suspect.

If you get a chance, shoot me a copy of that Nature letter. I'd love to read it and maybe comment on it on the blog.

Truthfully, I'd treat the MB stuff as a lot less suspect. It's become a science that's one of the 'hardest' around. Frankly, more so than paleo, alas.

There are molecular clock issues and whatnot still, but they're getting better and better. Fossils just tell us when one individual lived: not the first, not the last.

Genes have the potential tell us when the divergence actually took place. Now it has issues with we can only play with extant or near extant critters, but...