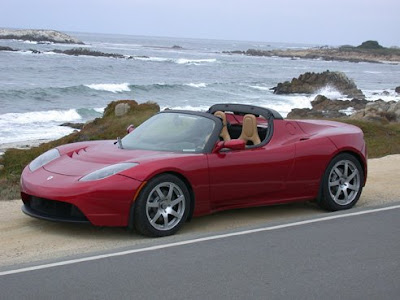 Tesla Motors has defied skeptics by delivering an electric sports car many said would never see a showroom. But to develop a sedan with broader appeal and get a battery plant up and running, Tesla says, it needs $450 million in loans from the Obama Administration. That raises a thorny question: Are taxpayer dollars earmarked for green technology best gambled on small startups such as Tesla or big but troubled players including General Motors (GM) and Ford (F)?

Tesla deserves some credit. The Silicon Valley upstart has raised some $195 million in capital—albeit more than a third of it from Chairman and CEO Elon Musk—and has built the first car that runs on cutting-edge lithium ion batteries. Technologically, Tesla's Roadster is a winner. It travels 240 miles on a charge before it needs to plug in—more than twice as far as BMW's soon-to-debut Mini E. After initially losing $40,000 apiece on the sports car, Musk says he's now making money on each Roadster.

Eager to build a sedan, Musk is pinning his hopes on the U.S. Energy Dept. The DOE is offering two kinds of credit lines: one for companies working on alternative energy projects and one for carmakers developing green vehicles. Automakers may apply for both kinds of credit, which they can access as a project hits key milestones.

To qualify for DOE money, Musk needs to prove Tesla is viable. "We'll be profitable in five months," he says. He also needs to raise tens of millions of dollars in matching funds. Given the business environment, that won't be easy. In what some industry watchers deem an act of desperation, Musk aims to ask potential buyers of the new sedan to pay a big chunk of the $50,000 sticker price up front. Yet the car won't be ready until 2011, and that's only if the government gives him credit. Musk acknowledges that customers would be putting "their money at risk."

I really want a Roadster. It's way out of my budget for right now, but I keep praying the company will stay in business until I can afford one. That said, I wish they'd do more than a sedan. They had been working on a mini van before their recent credit issues. All I can say is go, Elon, go!
Posted by Will Baird at Friday, January 16, 2009

I think he really wants one to. He'd previously heard of them but I don't think he'd looked in detail before now.