Christmas for the Pacific Bairds 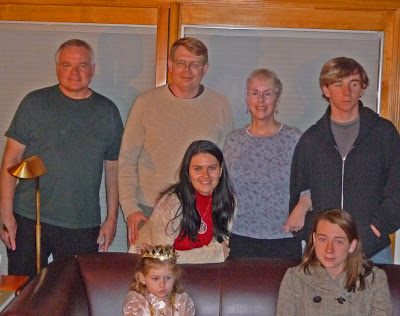 Yes, yes, I've already made the request to my wife not to give me any more Turkish Delight.

We had a good time and Lyuda introduced the family to shuba, that tasty, but complex herring salad. It was a surprise hit.

I also learned that William Patrick Baird, my grandfather and namesake, passed away Dec 12, 2008. He was 88 years old. He'd had multiple bouts of cancer, outlived his wife by 13 years, smoked, drank, was a career soldier, fought in WW2, Korea, and Vietnam and he had 8 kids. He was my last remaining grandparent and I used to joke that Heaven wouldn't take him and hell was terrified of him.

My grandfather was born in Newcomb, Tennessee to William Marion Baird and Rose Baird (nee Campbell, an Irish immigrant). WMB left Newcomb with his family over some sort of bit of nastiness, or so goes tha family folklore, prior to the Depression and ended up in Philadelphia. There they'd remain for quite some time until Rose died during the Depression. Apparently jobless, WMB placed his son (my grandfather) and his sister in an orphanage. In 1938, my grandfather joined the US Army. There he remained his whole life. He only had an 8th grade education and when we spoke on the phone he was extraordinarily self-conscious. Even so, he was an avid reader and from what I have been told had a knack for languages. He was part of the Army of Occupation in Germany where he met my grandmother, Elizabeth (nee Steinbrenner) in Heidelberg, Germany. As part of the army, he dragged his family from Heidelberg to Berlin to Washington State to New Jersey to DC to the Panama Canal Zone to Frankfurt to New Jersey again. He retired in the late seventies to be called back into service during the Reagan build up. For some reason I think he was ultimately an E-9, but I could be mistaken. His wife passed away in 1995. He lived a quiet retired life. From what I understand, he kept some tabs on the Baird boys that went into the military and had some serious pride in them. Then, ultimately, he passed.

Part of the reason that I didn't hear about this sooner was that Bairds are like cats: we fuzz each other big time when we are together (or hiss as the case may be), but when out of sight...fortunately, we marry nonBairds and that helps. Some. Lynn and Lyuda have been keeping the locals held together. Otherwise we wander off on our own.

I wish I had a pic of him to share, but I don't. I never even met him or my grandmother. Sometimes that Baird "Grumpy Gene" as we jokingly labeled it at the party is very annoying.

Oh, and Avrora in the princess get up is because Avrora had insisted her name the last time was 'Princess' and so Lynne went with it. That dress is adorable, but I fear what the outcome of all of this may be! Avrora really made out like a bandit this year.
Posted by Will Baird at Tuesday, January 06, 2009

Hi. My fiancee Tina is the great-granddaughter of William and Rose Baird (through their youngest daughter, Teresa, born 1929 in Philadelphia). I'm doing research on the family history and was wondering if you had found any additional information on Rose (especially immigration, marriage, or death records).

So far I have the 1920 and 1920 census for the Bairds, both years in which they lived in Philadelphia with and next to Rose's younger sister, Sarah J. (Campbell) Moss, respectively.

If you have any additional information or can point me to someone who does, I'd appreciate it. Thanks.