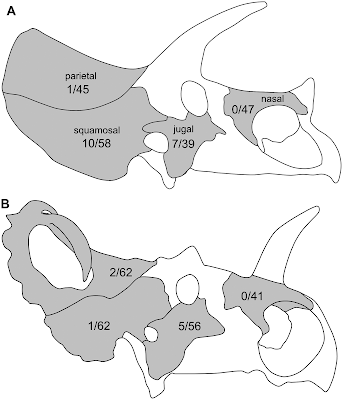 How did the dinosaur Triceratops use its three horns? A new study published in the open-access, peer reviewed journal PLoS ONE and led by Andrew Farke, curator at the Raymond M. Alf Museum of Paleontology, located on the campus of The Webb Schools, shows that the headgear was not just for looks. Battle scars on the skulls of Triceratops preserve rare evidence of Cretaceous-era combat.

"Paleontologists have debated the function of the bizarre skulls of horned dinosaurs for years now," said Farke. "Some speculated that the horns were for showing off to other dinosaurs, and others thought that the horns had to have been used in combat against other horned dinosaurs. Unfortunately, we can't just go and watch a Triceratops in the wild."

If Triceratops fought each other with their horns, wounds from this combat would be preserved in the fossil bones. So, Farke joined forces with paleontologists Ewan Wolff of the School of Veterinary Medicine at the University of Wisconsin and Darren Tanke of the Royal Tyrrell Museum of Paleontology in order to search museum collections throughout North America for evidence of these injuries. The researchers focused on the skulls of Triceratops and a closely-related dinosaur, Centrosaurus.

"If Triceratops and Centrosaurus only used their horns and frills for showing off, we would expect no difference in the rate of injury for both animals," stated Farke. Instead, the team found that the squamosal bone, which forms part of the frill, was injured 10 times more frequently in Triceratops than in Centrosaurus. He added, "The most likely culprit for all of the wounds on Triceratops frills was the horns of other Triceratops."

Other paleontologists had also noted abnormalities in the skulls of horned dinosaurs, but later work found that at least some of these supposed injuries were caused by random, non-traumatic bone resorption similar to osteoporosis. Additionally, previous researchers only focused on a handful of specimens. The new study included over 400 observations, which were analyzed statistically to detect differences between Centrosaurus and Triceratops.

"In the past individual remains have been used to reconstruct the story of ancient injuries," said co-author Wolff. He continued, "I think this research shows the great potential of looking at injury patterns, even less obvious ones, to provide appropriate conclusions. The features we studied were very subtle and in many cases had been overlooked."

"Our findings provide some of the best evidence to date that Triceratops might have locked horns with each other, wrestling like modern antelope and deer," said Farke. The researchers speculate that many of the injuries they observed may have been caused by misplaced horn thrusts from rival animals. Similar injuries are occasionally seen in modern horned animals.

At least it wasn't a war wound like what Joel and Ross taunted me about at Nellie's in LC a looooong time ago. Much to their dismay at the results. *snorks*

Anyways, the paper is here. The guilty scientist is here.
Posted by Will Baird at Wednesday, January 28, 2009