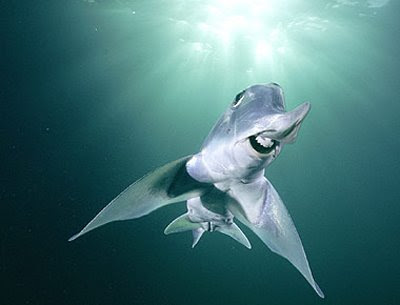 he elephant shark, a primitive deep-sea fish that belongs to the oldest living family of jawed vertebrates, can see color much like humans can.

This discovery, published in the March 2009 issue of Genome Research, may enhance scientists' understanding of how color vision evolved in early vertebrates over the last 450 million years of evolution.

"It was unexpected that a 'primitive' vertebrate like the elephant shark had the potential for color vision like humans. The discovery shows that it has acquired the traits for color vision during evolution in parallel with humans," said Byrappa Venkatesh, Ph.D., who with David Hunt, Ph.D., headed the research team responsible for this surprising discovery.

Dr. Venkatesh is a scientist at Singapore's Institute of Molecular and Cell Biology (IMCB), while Dr. Hunt is based at the Institute of Ophthalmology at University College London (UCL).

The research team found that the elephant shark had three cone pigments for color vision and, like humans, it accomplished this through gene duplication.

Dr. Venkatesh said that the finding underscores the research utility of the elephant shark, which IMCB scientists proposed in 2005 as a valuable reference genome to understand the human genome.

In a separate paper titled, "Large number of ultraconserved elements were already present in the jawed vertebrate ancestor," published in the journal Molecular Biology and Evolution in March 2009, the research team reported that they had discovered that the protein sequences in elephant shark were evolving at a slower rate than in other vertebrates.

This finding indicates that the elephant shark had retained more features of the ancestral genome than other vertebrates belonging to the same evolutionary tree and hence was a useful model for gaining insight into the ancestral genome, in which the human genome also has its roots.