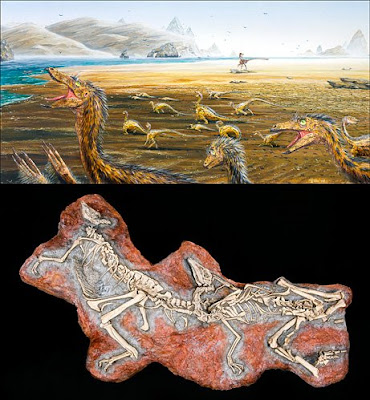 Like teenagers at the mall, young dinosaurs may have wandered in herds—fending for themselves while adults were busy nesting, according to a new report on one of the world's best preserved fossil sites.

About 90 million years ago a herd of more than 25 birdlike dinosaurs got stuck in the mud at the edge of a drying lake and perished together in modern-day China, said study co-leader Paul Sereno, a University of Chicago paleontologist.

Nearly complete skeletons of the plant-eaters were found at the Gobi desert site—some stacked on top of each other.

Plunge and scratch marks are preserved in the long-hardened mud, showing the young dinosaurs' futile attempts at escape.

The dinosaurs' flailing likely attracted predators that feasted on the meatiest parts of the young—the hips, Sereno said. Only hip bones are missing from the fossilized bodies.

I'd say flock. Definitely flock. After all, that's what groups of modern birds are called.

Since birds are dinos, and since we've decided to name groups of birds "flocks," I'd say yes. Although there are other names for flocks of specific kinds of birds, like, "a murder of crows." How about, "an insinuation of Sinornithomimus dongi?" Maybe, "a troup of Sinornithomimus," as in a mime troup. Troop. Troupe. Whatever. Flock, not herd.

Great post. I also am fascinated by this epic find that Sereno's excavation uneathed.

It's a sad thing that happened to the pack of teenage dinos, but their remains will enable Sinornithomimus dongi to become one of the best understood dinosaurs in the world.