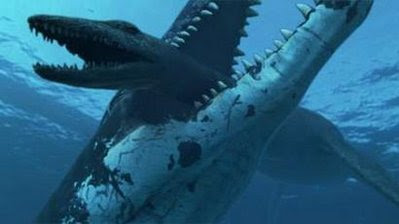 A giant fossil sea monster found in the Arctic and known as "Predator X" had a bite that would make T-Rex look feeble, scientists said Monday.

"With a skull that's more than 10 feet long you'd expect the bite to be powerful but this is off the scale," said Joern Hurum, an associate professor of vertebrate paleontology at the museum who led the international excavation in 2008.

"It's much more powerful than T-Rex," he said of the pliosaur reptile that would have been a top marine predator. Tyrannosaurus Rex was a top land carnivore among dinosaurs.

The scientists reconstructed the predator's head and estimated the force by comparing it with the similarly-shaped jaws of alligators in a park in Florida.

"The calculation is one of the largest bite forces ever calculated for any creature," the Museum said of the bite, estimated with the help of evolutionary biologist Greg Erickson from Florida State University.

Predator X's bite was more than 10 times more powerful than any modern animal and four times the bite of a T-Rex, it said of the fossil, reckoned at 147 million years old. Alligators, crocodiles and sharks all now have fearsome bites.

The teeth of the pliosaur, belonging to a new species, were a foot (30 cms) long. The scientists reconstructed the reptile from a partial skull and 20,000 fragments of skeleton.

The pliosaur, estimated to have weighed 45 tonnes, was similar to but had more massive bones than another fossil sea monster found on Svalbard in 2007, also estimated at 50 feet long and the largest pliosaur to date.

"It's not complete enough to say it's really bigger than 15 meters," Hurum said of the new fossil.

Wasn't there already a giant bad-ass Northern European pliosaur lurking around, or was that a different find?

IIRC, this is a second pliosaur from the same locale. No name has been given to this one yet, but the other, again iirc, has been named.