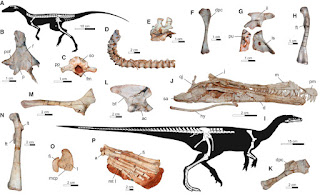 Dinosauromorpha includes dinosaurs and other much less diverse dinosaur precursors of Triassic age, such as lagerpetids [1]. Joint occurrences of these taxa with dinosaurs are rare but more common during the latest part of that period (Norian-Rhaetian, 228–201 million years ago [mya]) [2, 3]. In contrast, the new lagerpetid and saurischian dinosaur described here were unearthed from one of the oldest rock units with dinosaur fossils worldwide, the Carnian (237–228 mya) Santa Maria Formation of south Brazil [4], a record only matched in age by much more fragmentary remains from Argentina [5]. This is the first time nearly complete dinosaur and non-dinosaur dinosauromorph remains are found together in the same excavation, clearly showing that these animals were contemporaries since the first stages of dinosaur evolution. The new lagerpetid preserves the first skull, scapular and forelimb elements, plus associated vertebrae, known for the group, revealing how dinosaurs acquired several of their typical anatomical traits. Furthermore, a novel phylogenetic analysis shows the new dinosaur as the most basal Sauropodomorpha. Its plesiomorphic teeth, strictly adapted to faunivory, provide crucial data to infer the feeding behavior of the first dinosaurs.